The International Exhibition of 1876 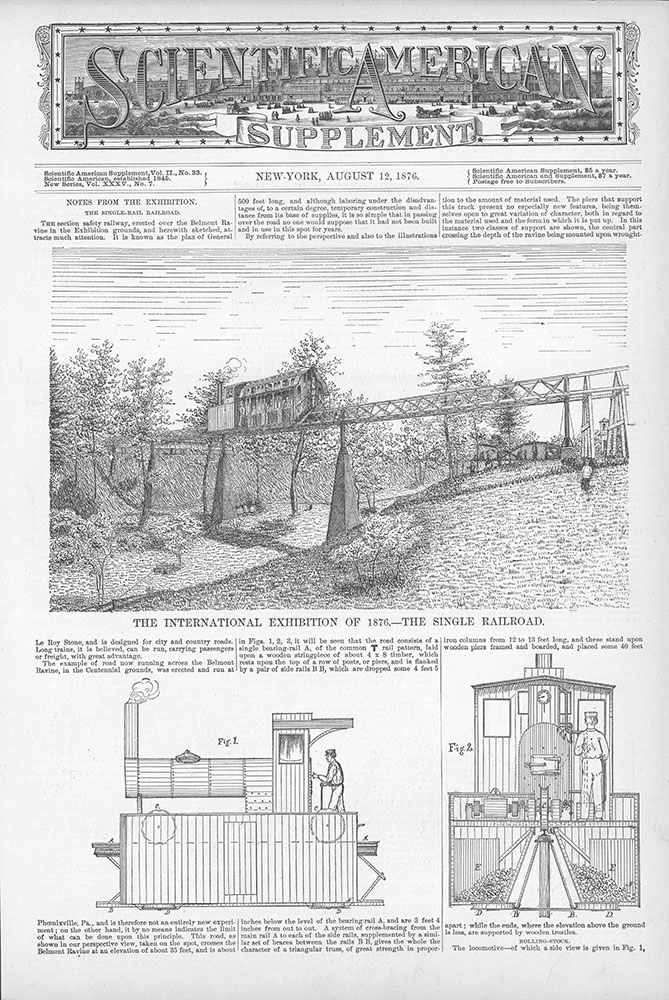 Item No: c150020
Title: The International Exhibition of 1876
Additional Title: The International Exhibition of 1876-The Single Railroad.
Series: Engravings
Media Type: Engravings
Notes: "By referring ot the perspective and also to the illustrations in Figs. 1, 2, 3, it will be seen that the road consists of a single bearing-rail A, of the common T rail pattern, laid upon a wooden stringpiece of about 4 x 8 timber, which rests upon the top of a row of posts, or piers, and is flanked by a pair of side rails B B, which are dropped some 4 feet 5 inches from below the level of the bearing-rail A, and are 3 feet 4 inches from out to out. A system of cross-bracing from the main rail A to each of the side rails, supplemented by a similar set of braces between the rails B B, gives the whole the character of a triangular truss, of great strength in proportion to the amount of material used.
Notes: "Notes from the Exhibition. The single-rail railroad. The section safety railway, erected over the Belmont Ravine in the Exhibition grounds, and herewith sketched, attracts much attention. It is known as the plan of General Le Roy Stone, and is designed for city and country roads. Long trains, it is believed, can be run, carrying passengers or freight, with great advantage.
Notes: "The example of road now running across the Belmont Ravine, in the Centennial grounds, was erected and run at Phoenixville, Pa. and is therefore not an entirely new experiment; on the other hand, it by no means indicated the limit of what can be done upon this principle. This road, as shown in our perspective view, taken upon the spot, crosses the Belmont Ravine at an elevation of about 35 feet, and is about 500 feet long, and although laboring under the disadvantages of, to a certain degree, temporary construction and distance from its base of supplies, it is so simple that in passing over the road no one would suppose that it had not been built andin use in this spot for years.
Notes: "The piers that support this track present no especially new features, being themselves open to great variation of character, both in regard to the material used and the form in which it is put up. In this instance two classes of support are shown, the central part crossing the depth of the ravine being mounted upon wrought-iron columns from 12 to 13 feet long, and these stand upon wooden piers framed and boarded, and placed some 40 feet apart; while the ends, where the elevation above the ground is less, are supported by wooden trestles."
Notes: 1 engraving; 15.6 x 10.5 cm.
Notes: A single rail train crossing a bridge over a ravine, with side and rear diagrams of the locomotive.
Notes: Removed from: Scientific American supplement, vol.II, no.33, August 12, 1876, p.1.
Creator Name: Scientific American, inc.