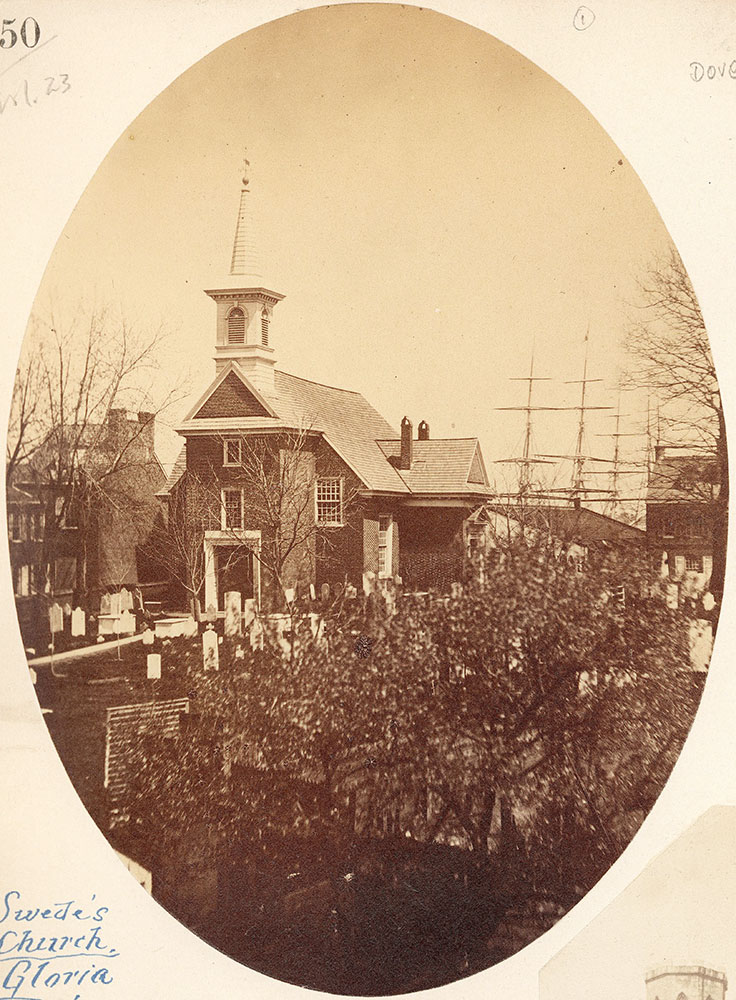 Item No: pdcl00017
Title: Gloria Dei (Old Swedes') Church, Swanson Street near Christian
Additional Title: Swede's Church, Gloria Dei
Media Type: Salt Prints
Source: Print and Picture Collection
Notes: "One of the most famous and enduring of Philadelphia's landmarks, this old church in Southwark is one of the few seventeenth-century buildings still standing. Erected between 1698 and 1700 by the Swedish community, it stood originally on the banks of the Delaware close enough for the water to touch its foundations. In the nineteenth century it was surrounded by buildings of the shipping industry, but it now stands isolated by expressways for automotive traffic. During the eighteenth century Gloria Dei remained a mission of the National Church of Sweden, which was Lutheran. After the Revolution, however, the little church, in a spirit of independence, requested and received permission from Sweden to elect its own pastor. The incumbent pastor was permitted to remain until his death in 1831, after which the English-speaking congregation sought yet another change and joined the Episcopal communion in 1845. The famous ornithologist, artist and poet Alexander Wilson is buried in the churchyard of Gloria Dei."--OPEP, p. 16.
Notes:


Notes: The church with cemetery in the yard viewed over trees and rooftops of houses; shipmasts in the background.
Bibliography: Reprinted in: Old Philadelphia in early photographs, 1839-1914/edited by Robert F. Looney. New York: Dover Publications, c1976.