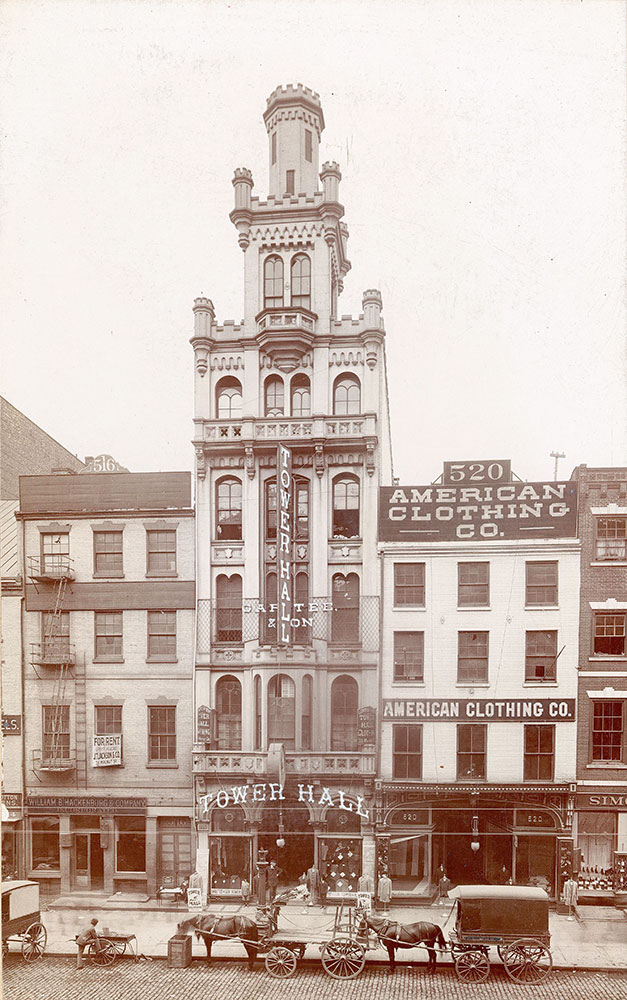 Item No: pdcl00073
Title: Tower Hall, 518 Market Street
Additional Title: Tower Hall, 518 Market Street, circa 1898
Historic Street Address: Market Street, 518
Media Type: Photographic Prints
Source: Print and Picture Collection
Notes: "This fanciful bit of Victoriana was erected for Col. Joseph M. Bennett, who rose to fame as a clothier and by the 1850s was owner of one of the largest businesses in the city. He attributed his success in part to his method of advertising. His printed notices were always written in verse by a specially hired 'resident poet,' and he also attracted the general public by means of this spectacular building, printing his name in large letters on one side, then reversing the letters exactly on the opposite side. John Wanamaker was employed in this store in his early years and here learned the clothing business and probably the power of advertising. The building was sold in 1879 to Garitee and Son, who occupied it until after 1900."--OPEP, p. 79.
Notes: The building designated "Tower Hall," occupied by Garitee & Son. At left is William B. Hackenburg & Company Incorporated with a sign in the upper window reading "For rent upper floors, J.T. Jackson & Co. 711 Walnut St." On the right is the American Clothing Co. In front are horses with wagons or carriages, sample coats on stands and men on the sidewalk.
Bibliography: Reprinted in: Old Philadelphia in early photographs, 1839-1914/edited by Robert F. Looney. New York: Dover Publications, c1976.