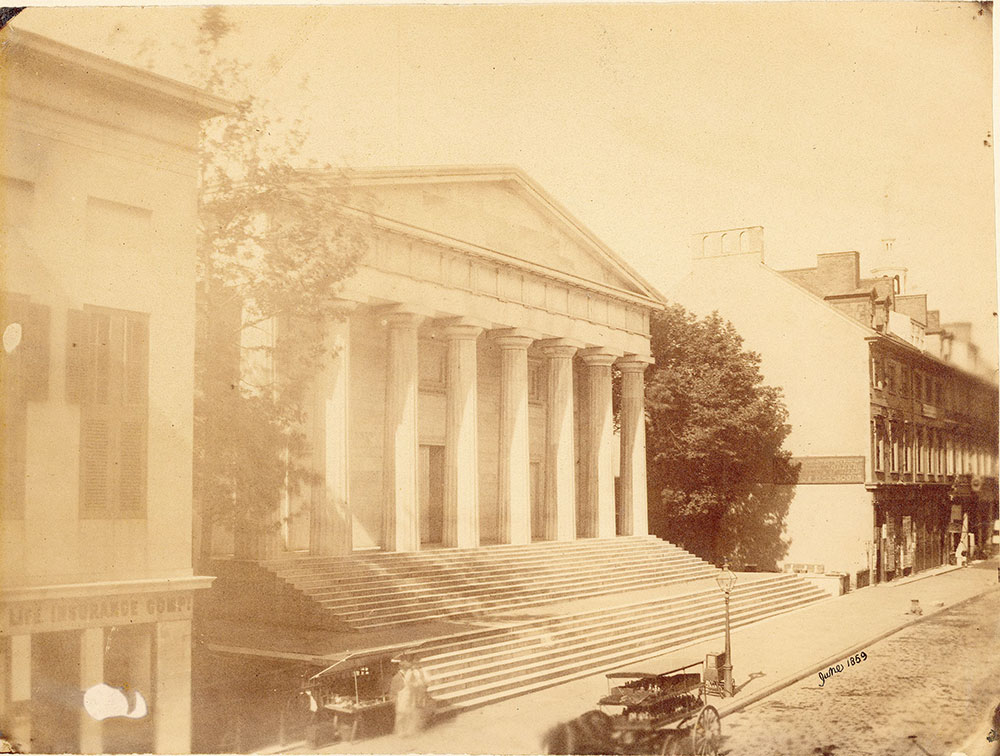 Item No: pdcl00118
Title: Second Bank of the United States, 420 Chestnut Street
Additional Title: Chestnut Street between 4th and 5th, south side. U.S. Customs House
Historic Street Address: 420 Chestnut Street
Historic Street Address: Fourth and Chestnut Streets
Media Type: Albumen Prints
Source: Print and Picture Collection
Notes: "The Second Bank of the United States was the epicenter of banking not only in Philadelphia but in the nation as well, after the First Bank's charter expired in 1811. The building shown here was opened in 1824. Like the First Bank, the Second Bank was also a depository of the Federal government, and in 1832, while Nicholas Biddle was its president, it became the focal point of the struggle between Andrew Jackson and the Whigs over national banking policies. Its charter expired in 1836 and was not renewed by the Federal government, and the bank then became for one year the Pennsylvania State Bank. The building was bought by the government in 1844 when it was remodelled and made the Customs House for the City and Port of Philadelphia. After a new Customs House was built in 1930, this building was leased to the Carl Schurz Memorial Foundation for 20 years. It is now a national historic monument and part of Independence National Historic Park."--OPEP, p. 123.
Notes: The building; to the right are row houses, on the left a corner of the Philadelphia Bank is visible. In front is a street lamp, a wagon with goods pulled by a horse, and some people in front of a booth set up on the sidewalk. At left: "... Life Insurance Co."
Bibliography: Reprinted in: Old Philadelphia in early photographs, 1839-1914/edited by Robert F. Looney. New York: Dover Publications, c1976.