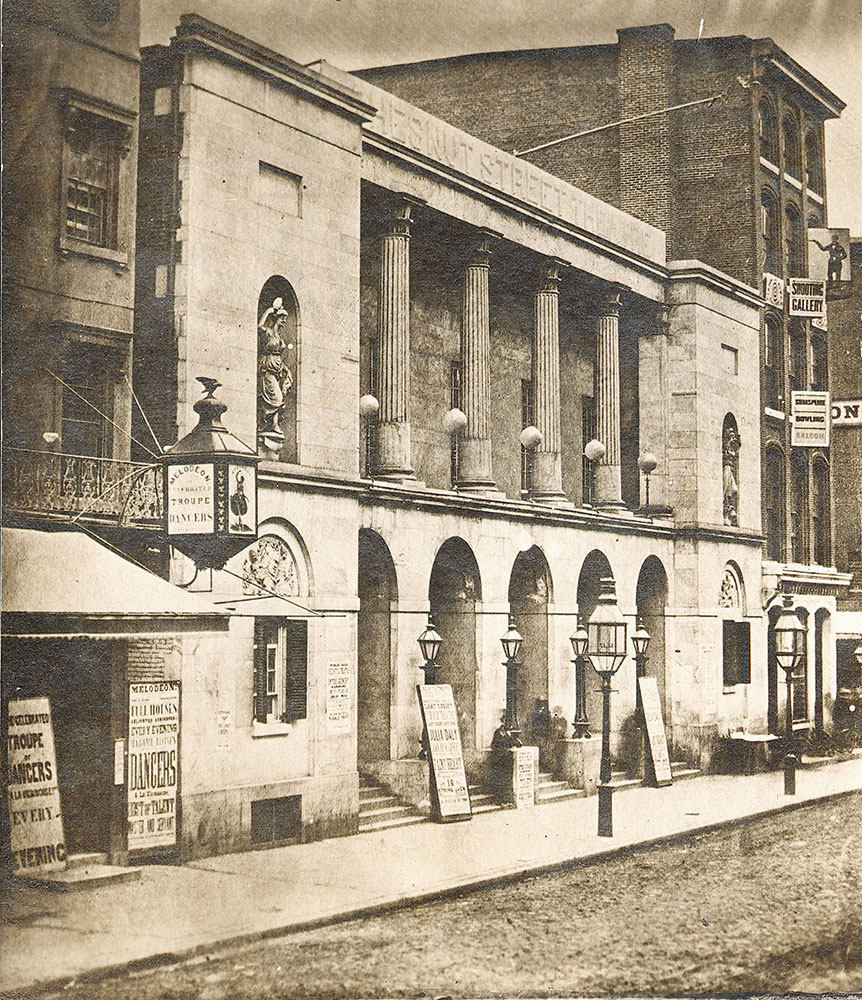 Item No: pdcl00125
Title: Chestnut Street Theatre, Chestnut Street at 6th
Additional Title: Chestnut Street Theater, Chestnut Street at 6th
Historic Street Address: Sixth and Chestnut Streets
Media Type: Albumen Prints
Source: Print and Picture Collection
Notes: "The Chestnut Street Theatre figured prominently in the early development of the American theater in Philadelphia. The scene of many 'firsts,' it was also the subject of political and religious controversy. There were at least two theaters built on the site at 6th and Chestnut Streets. The earlier was opened in 1794 and was said to be the most elegant of its time. It burned down in 1820, and the building in the photograph, the reconstruction, was opened in 1822. Just visible on the left is the Melodeon, and on the right the Shakespeare Bowling Saloon. The photograph was made at the time of the last performance before the theater was taken down."--OPEP, p. 131.
Notes: The theater, with archways, lamps and sculptures; at top "Chestnut Street Theatre." Two street lamps on sidewalk. Signboards: "...Last night ... Julia Daly ... Faint heart ..." Building on right "Shakespeare Bowling Saloon" has sign on fourth story: "Shooting gallery" next to a painting of a man shooting a pistol. Behind this is a partial view of a building with a sign "... on Wood." Building on left has sign: "Melodeon ... full houses ... every evening ...dancers ... best of talent master and servant." Electric sign attached to building has "Melodeon ... troupe dancers" on one side and picture of a dancing woman on the other.
Bibliography: Reprinted in: Old Philadelphia in early photographs, 1839-1914/edited by Robert F. Looney. New York: Dover Publications, c1976.