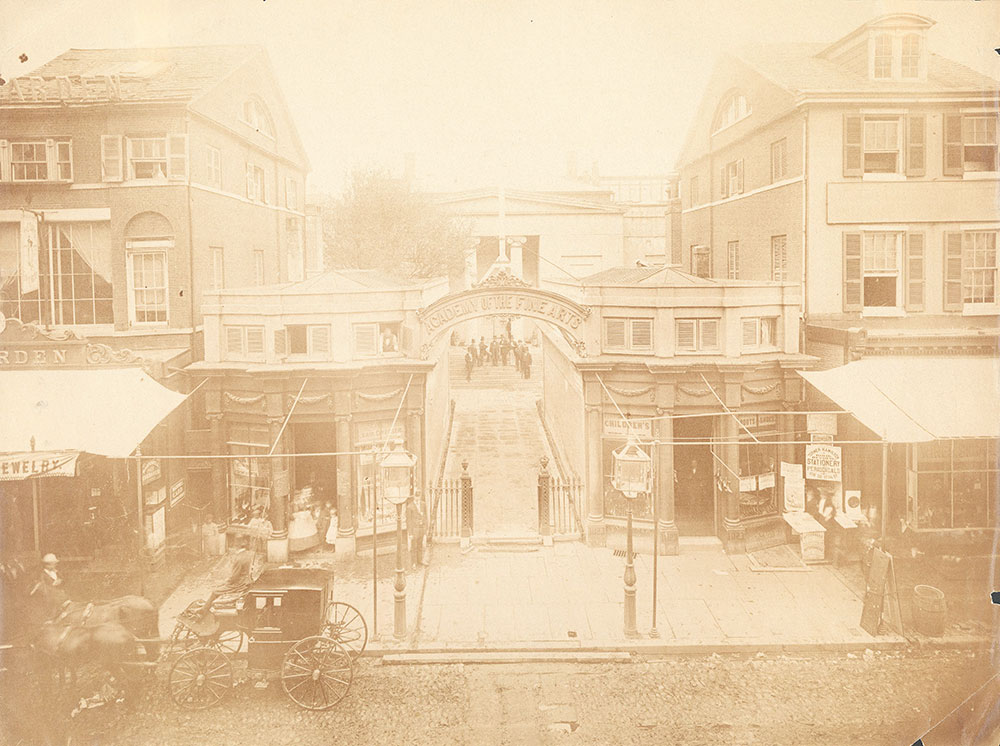 Item No: pdcl00132
Title: Academy of the Fine Arts, 1029 Chestnut Street
Additional Title: Pennsylvania Academy of the Fine Arts
Historic Street Address: Washington Square West
Media Type: Albumen Prints
Source: Print and Picture Collection
Notes: "When the Academy was first built in 1806, it was surrounded by a garden and the site had a frontage of one hundred feet on Chestnut Street. By 1869, however, most of this property had been sold and business establishments had almost hidden the Academy from view. The photograph was made just before the building was sold to Robert Fox, who opened Fox's New American Theatre (later the Chestnut Street Opera House) on this site in 1870."--OPEP, p. 137.
Notes: The Academy set back in a court-yard. Entrance with gate and sign above: "Academy of the Fine Arts," with walkway between two retail stores. Group of men with top hats posing on the steps of the Academy. Two street lamps on sidewalk; two horses pulling a carriage. Both stores have doors open with people looking out; store on left has man looking out window on top floor. Store on left: "Ladies hair dresser..." on one window and on other: "Selling out below cost..." To the left of this: "[?]rden"; below and attached to the awning: "...Jewelry"; and free-standing letters at top of building: "[?]arden." Store to the right of Academy entrance: "Children's..." and "Boots & shoes." Printed on building above the sidewalk: "1023, J. Parsons & Co. men's boy's boots shoes [?]." on both sides of the door. To the right of this store are numerous signs: "Hitchcock's half dime music," "Woods [?]," "Turner Hamilton book binding, stationery, and periodicals, 106 So. 10th St.," and "Hitchcock's Dime Music." The next store: "Wines [...]."
Bibliography: Reprinted in: Old Philadelphia in early photographs, 1839-1914/edited by Robert F. Looney. New York: Dover Publications, c1976.