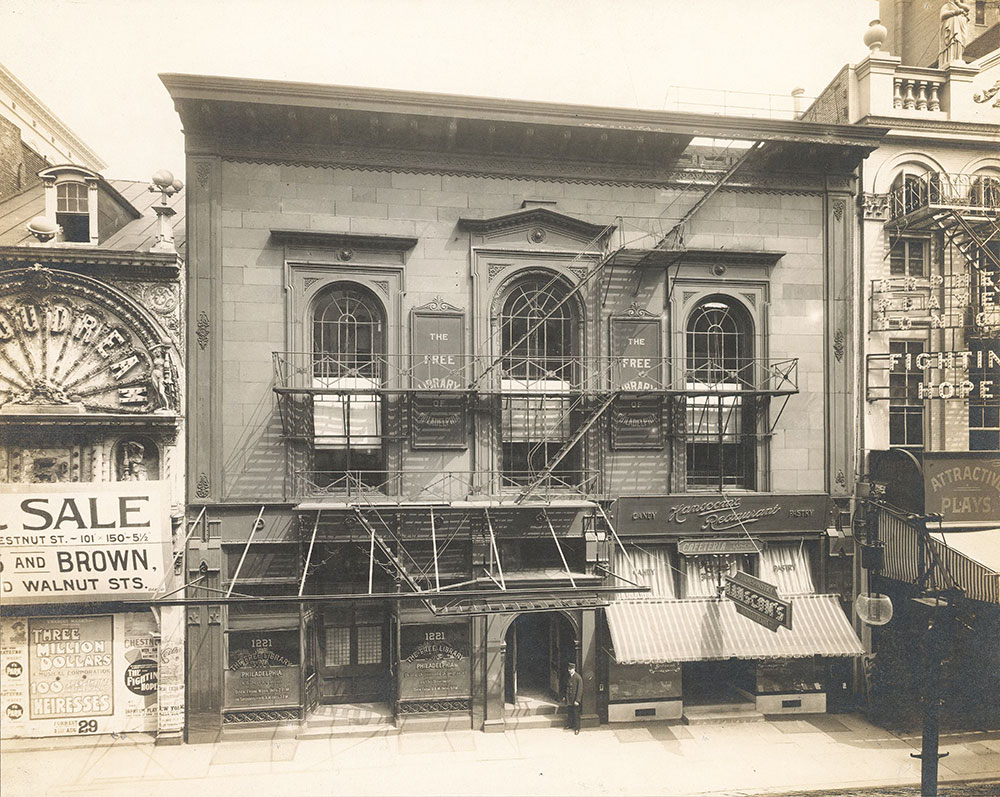 Item No: pdcl00137
Title: Free Library of Philadelphia, Chestnut Street at 12th
Additional Title: Free Library of Philadelphia, 1217-21 Chestnut Street
Historic Street Address: 1217-21 Chestnut Street
Historic Street Address: Washington Square West
Media Type: Albumen Prints
Source: Print and Picture Collection
Notes: "After moving from its quarters in City Hall, the Free Library shared its new home in the Concert Hall, which dated from the 1850s, with Hanscom's Restaurant. The building was converted to accommodate the Free Library in the 1890s."--OPEP, p. 143.
Notes: The building with three large windows on the top half, between each are two signs: "The Free Library of Philadelphia." The face of the building is covered by a fire escape. Guard stands at the entrance of the Library. Another door to the left has storefront windows on either side, on the window to the left: "1221 The Free Library of Philadelphia, Children's Room, open from noon until 7 p.m., on Saturdays from 9 a.m. until 7 p.m."; on the window to the right: "1221 The Free Library of Philadelphia, Public Documents Department in the basement, open from 9 a.m. until 5 p.m." The first floor on the right side of the building is a restaurant: "Hanscom's Restaurant, candy, pastry," "Cafeteria, help yourself, lunch in basement." Sign extending over sidewalk and above the awning: "Candies, pastry, Hanscom's Restaurant." Building to the right has electric sign on upper section: "Orphe[?] playe[?] to nig[ht?], Fightin[g?] Hope," and below this a sign: "Attractive plays." The building to the left of the Library has at the top: "[?oudream," below this: "[?] sale, [Ch]estnut St., 101' x 150'-5 1/2", [?] and Brown, [?] Walnut Sts." The first floor of the building is covered in advertisements: "Three Million Dollars, a musical corporation, 100 Heiresses, spendthrifts in the firm, Forrest 3 [?] Aug 29," "The Fighting Hope," and other fragments of signs. Street lamp in the foreground.
Bibliography: Reprinted in: Old Philadelphia in early photographs, 1839-1914/edited by Robert F. Looney. New York: Dover Publications, c1976.