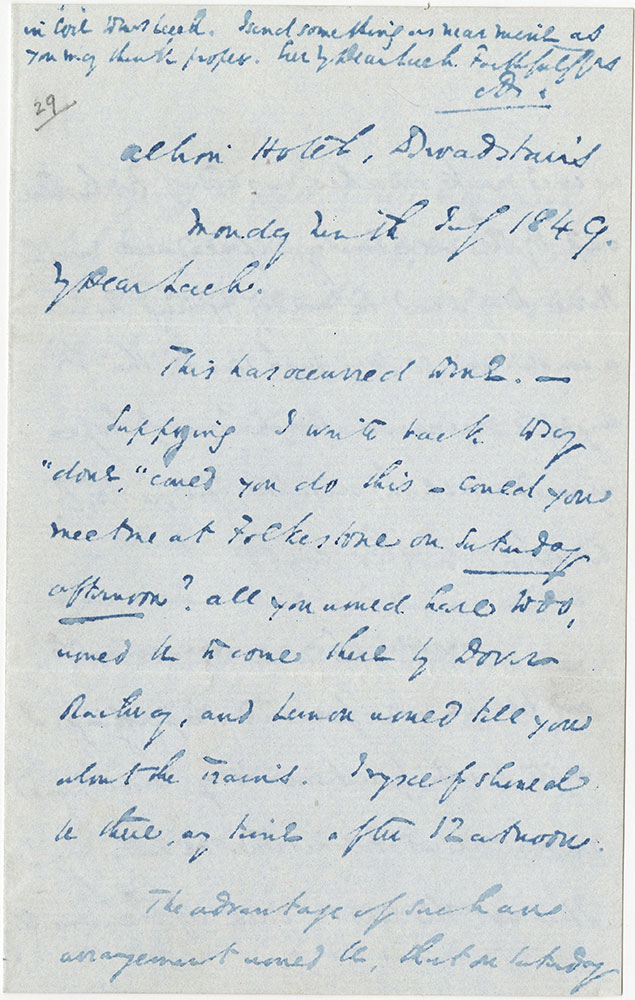 Albion Hotel, Broadstairs
Monday Ninth July 1849.
My Dear Leech.
This has occurred to me.--
Supposing I write back to say "done", could you do this--Could you meet me at Folkestone on Saturday Afternoon?  All you would have to do, would be to come there by Dover Railway, and Lemon would tell you about the Trains.  I myself should be there, any time after 12 at noon.
The advantage of such an arrangement would be, that on Saturday we could make ourselves masters of Folkestone and Hythe--on Sunday, if need were,master Herne Bay--and on Monday Morning be in a condition for any fresh start that might be necessary--though I really hope we could establish ourselves, prospectively, somewhere on this coast.
Consider of your arrangements, and tell me, as aforesaid, suppoging I write back by return to say "done", could you meet me at Folkestone on Saturday?  I have not the least idea of the domiciliary advantages of the place (there may be none) but I know the place itself to be a good one, and most accessible.  And we ought to look at it.
Answer, as a man of business as may be. Ahem!
There never was such a day as this is, here.  I am still of opinion that Broadstairs beats all watering places into what the Americans call "sky-blue fits".  Ballards contradictory habit has settled itself down into incurable madness.  I can advance no preposition whatever, that he will assent to.  He lays traps for me.  He says things that seem invitations and lures to certain replies--and when I make those replies, contradicts me dead.  I praised his little girls today, and he shook his head and said "You should see the boy Sir"--
There is no Shower Bath like the Demon.  That is my creed.  There is but one sea, and the Demon is its showerer.  Barnes is several degrees more offensive than ever.  Miss Collins, having drunk more Vinegar in the recess, is tighter in the waist, and her gowns have washed out a little more, and look like the things that are put on when you have your hair cut.  No other news.
Kate and Georgy (who will leave me to go en garcon on our voyage of discovery) unite in love to Mrs. Leech.  I send something as near mine as you may think proper.
Ever my Dear Leech
Faithfully Yrs.
CD. 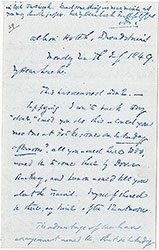 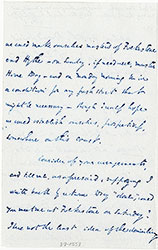 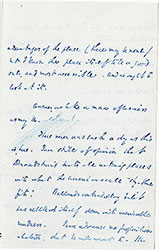 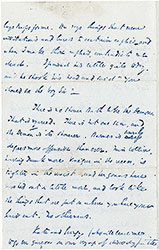 Envelope for ALs to John Leech