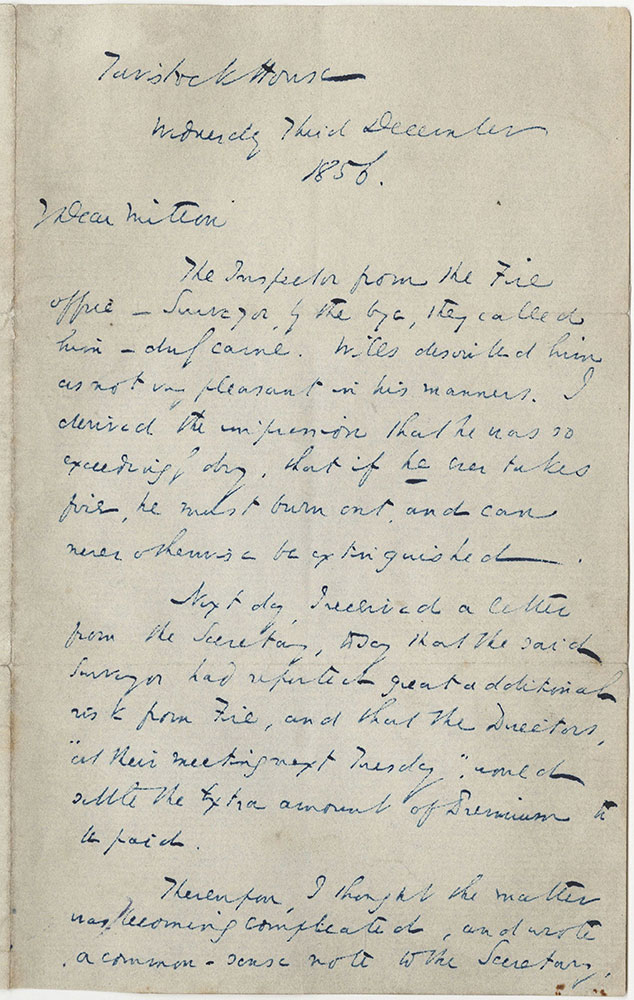 Monday Third December
1856.
Dear Mitten
The Inspector from the Fire Office—Surveyer, by the bye, they called him—
duly came. Wills described him as not very pleasant in his manners. I derived the impression that he was so exceedingly dry, that if he ever takes fire, he must burn out, and can never otherwise be extinguished.
Next day, I received a letter from the Secretary, to say that the said Surveyer had reported great, additional risk from Fire, and the Directors, “at their meeting next Tuesday”, would settle the Extra amount of Premium to be paid.
Thereupon, I thought the matter was becoming complicated, and wrote a common-sense note to the Secretary, (which I begged might be read to the Directors), saying that I was quite prepared to pay any extra Premium setting forth the plain state of the case.  (I did not say that the Lord Chief Justice, the Chief Baron, and half the Bench were coming: though I felt a temptation to make a joke about burning them all).
Finally, this morning comes up the Secretary to me (yesterday having been the great Tuesday), and says that he is requested by the Directors to present their compliments, and to say that they could not think of charging for any additional risk at all: feeling convinced that I would place the gas (which they considered to be the only danger) under the charge of one competent man. I then explained to him how carefully and systematically that was all arranged, and we parted with drums beating and colors flying on both sides.
Ever Faithfully
CD.

Fire Office refers to the Eagle Insurance Office, to which he had paid his annual premium of  £124.11.8 on Tavistock House, valued at £5000 on 20 Nov (CD's Account-book, MS Messrs Couts). 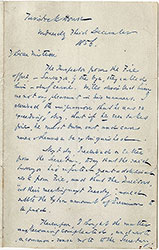 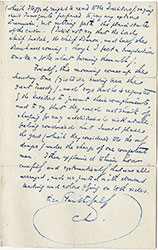