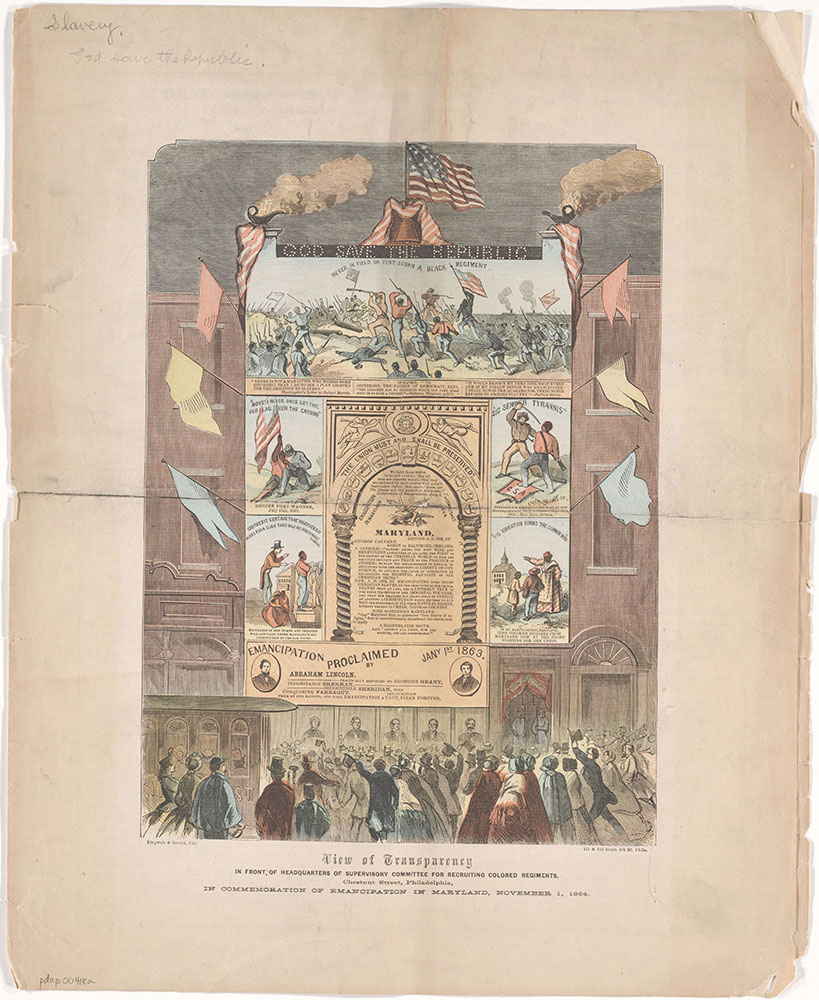 Library of Congress summary: A representation of an enormous illuminated transparency displayed on the facade of the federal recruiting office for Negro troops on Chestnut Street in Philadelphia on November 1, 1864. The display celebrated the emancipation of slaves in Maryland through the state's new constitution, adopted on October 13 of the same year. At the top of the transparency is a bell draped with bunting and surmounted by an American flag. On each side of it is a lit oil lamp. Beneath the bell, in bold letters, are the words "God Save the Republic." Immediately below this is a large battle scene where black troops storm an enemy redoubt, with the commentary, "Never in field or tent scorn a black regiment." Below the scene are quotations from George Washington, Thomas Jefferson, and Patrick Henry, affirming the ideal of emancipation. Four smaller scenes appear at right and left of a central panel (clockwise from upper left): 1. "Before Fort Wagner, July 11th, 1863," where a dying black Union standard-bearer gives up the flag to another, saying, "Boys!! I never once lett he old flag touch the ground." 2. "Struggle for a Rebel battle flag at New Market Heights, Near Richmond, Sept. 29th, 1864.--Maj. Genl. Butler," in which a black soldier bayonets a Confederate, saying, "Sic semper tyrannis." 3. "In St. Mary's County, Maryland," showing a black woman pointing out aschoolhouse to two black children saying, "Tis education forms the Common Mind." A subtitle reads, "12,000 colored soldiers from Maryland now at the front fighting for the Union." 4. A slave auction, with the note that thousands of women and children were sold to the far South annually under Maryland's old constitution. A quote attributed to Homer above the scene reads, "God fixed it certain that whatever day / Makes man a slave takes half his worth away." In the center of the transparency is an arch composed of blocks with the names of various virtues, supported by two columns, the one on the right labeled "Faith." The keystone of the arch is Justice. Above it are AndrewJackson's famous words, "The Union must and shall be preserved." Various textsexemplifying Maryland's tradition of religious and personal freedom appearinside the arch. Below are portraits of Abraham Lincoln and an unidentified man.