Murder of Col. Ellsworth of the Fire Zouaves. 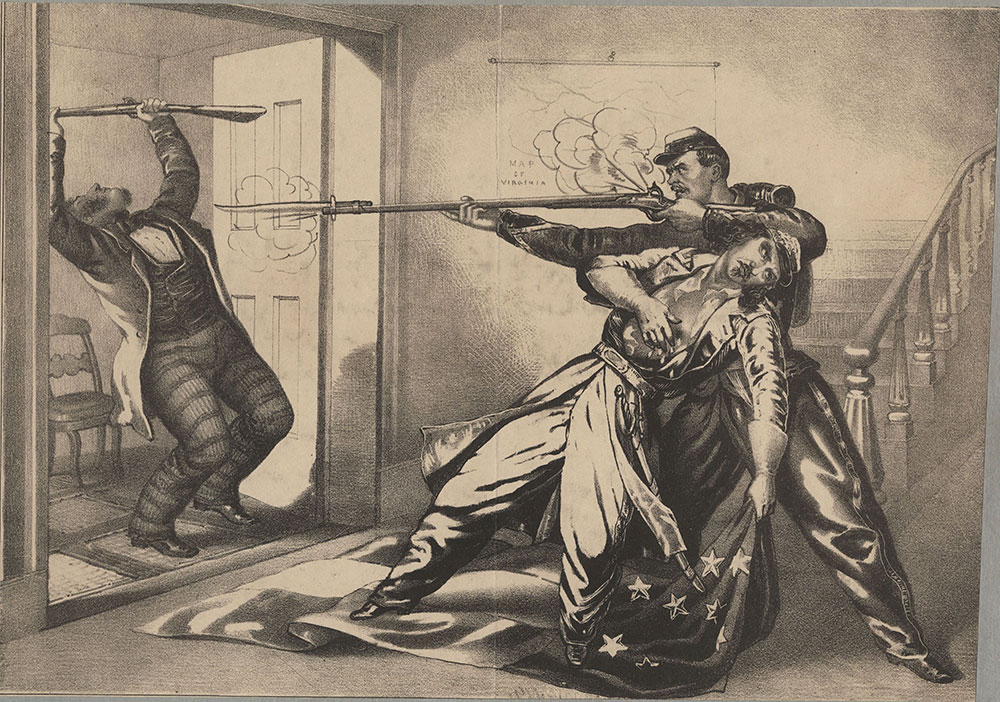 Item No: pdca00069
Title: Murder of Col. Ellsworth of the Fire Zouaves.
Additional Title: And the death of Jackson, his assassin, by the hand of Frank Brownell, at Alexandria, Virginia, May 24, 1861
Media Type: Lithographs
Source: Print and Picture Collection
Notes:

Colonel Elmer E. Ellsworth is best known as the first conspicuous casualty of the Civil War. The image illustrates the moment of his death as well as the death of James W. Jackson, his assassin, by the hand of  Corporal Francis E. Brownell. Ellsworth is shown dying but still clutching the Confederate flag he had just cut down from the roof of  the Marshall House Inn. Jackson, the owner of the Inn and a well-known secessionist is seen falling backwards after just being shot by Brownell, one of Ellsworth's men. President Lincoln was deeply saddened by Ellsworth's death, and ordered an honor guard to bring his friend's body to the White House, where it lay in state.

Lithograph published by J. Magee, at their store at 316 Chestnut Street, Philadelphia. Caption includes a poem by G. Gumpert as a memorial to Colonel Ellsworth: "Thou noble warrior, young and brave/ Thy courage ne'er shall be forgot,/ Sleep sweetly in the silent grave,/ A nation weeps thy mournful lot-/ For millions praise thy name./ It adds but to thy fame.