Action between the Kearsarge & Alabama. 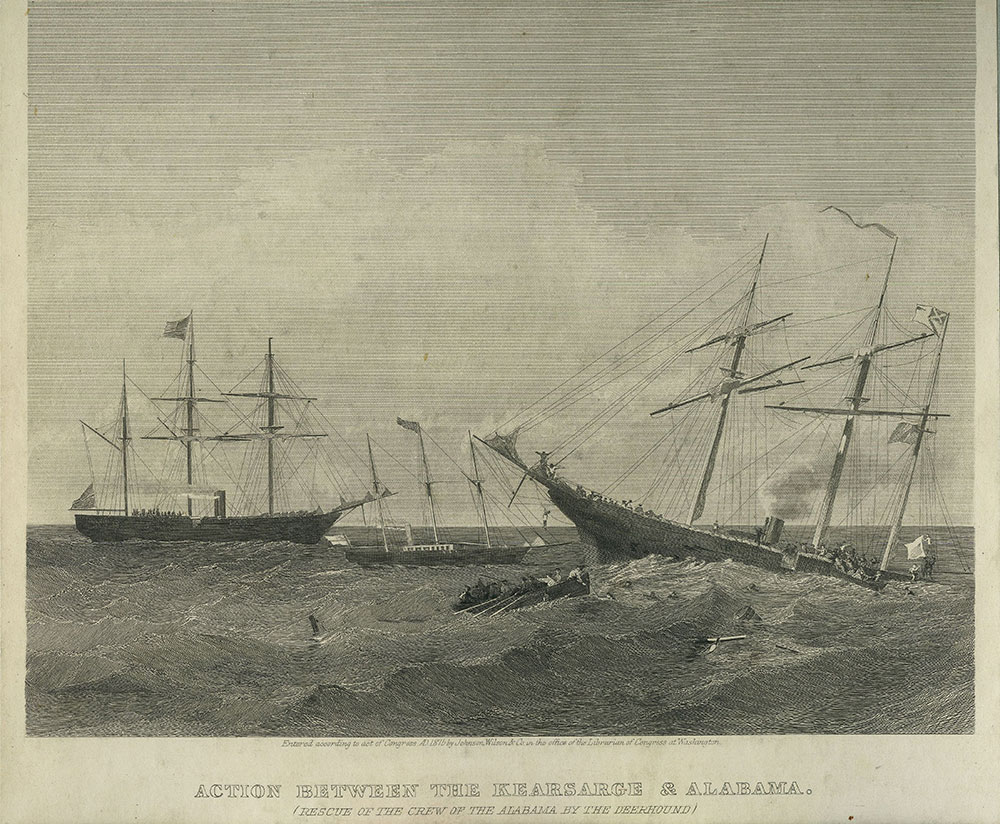 Item No: pdca00098
Title: Action between the Kearsarge & Alabama.
Additional Title: (Rescue of the crew of the Alabama by The Deerhound)
Media Type: Engravings
Source: Print and Picture Collection
Notes:

After nearly two years of highly successful cruising at the expense of the United States' commercial shipping, CSS Alabama returned to European waters in early June 1864. Badly in need of a refit, she put into Cherbourg, France, on 11 June. News of her presence soon reached the USS Kearsarge , which promptly steamed to Cherbourg, arriving on the 14th. Seeing that he was blockaded, with repairs delayed and with the probabability that his ship would not be able to resume her raiding activities, Alabama's Captain Raphael Semmes challenged Kearsarge's Captain John Winslow to a ship-to-ship duel. That suited Winslow very well, and he took station offshore and waited.

After four days of coaling, drill and other preparations, Alabama steamed out of Cherbourg harbor in the morning of 19 June 1864, escorted by the French ironclad Couronne, which remained in the area to ensure that the combat remained in international waters. On paper, Kearsarge and Alabama were well-matched, with the Union warship having a slight advantage in gun power and speed. As the Confederate approached, Kearsarge steamed further to sea, to ensure that Alabama could not easily return to port.

At 10:50 AM, Captain Winslow put his ship around and headed for the enemy. Alabama opened fire a few minutes later, at a distance of about a mile, and continued to fire as the range decreased. As the ships closed to about a half-mile, Kearsarge turned and began to shoot back. Both ships had their guns trained to starboard, and the engagement followed a circular course, with the ships steaming in opposite directions and turning to counter the other's attempts to gain an advantageous position. Superior Federal gunnery, and the deteriorated condition of Alabama's powder and shells, soon began to tell. Though Alabama hit her opponent several times, the projectiles caused little damage and few casualties. One shell hit Kearsarge's sternpost, failed to explode and survives today as a relic of the battle.

After about an hour's shooting, Alabama was beginning to sink, with several men killed and many others wounded. Among the injured was Semmes, who turned and tried to run back toward Cherbourg. However, when Kearsarge headed him off and the rising water stopped his engines, Semmes struck his flag. As Alabama sank, some twenty minutes after firing ceased, most of her crew were rescued by the victor and by the British yacht Deerhound. Those saved by the latter, including Semmes and most of his officers, were taken to England and thus escaped capture and imprisonment. One of the Civil War's most significant naval actions was at an end, as was the career of the Confederacy's most destructive ocean raider.