The Gods and Asuras Churn the Ocean of Milk 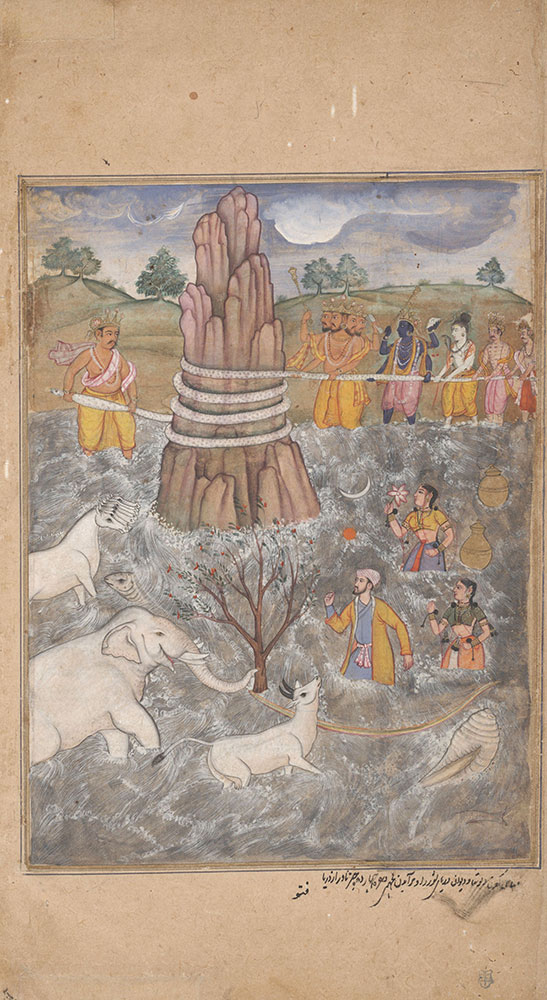 The Razmnama, or “Book of War,” is the Persian translation of the Sanskrit epic the Mahabharata. This leaf illustrates a Hindu creation myth, where six gods and an asura (anti-god), cooperate to churn the ocean of milk to release the elixir of immortality, the celestial steed, and the wish-granting tree. Although the story is Hindu, this painting features figures clothed in typical Mughal Islamic court costumes.

The main story of the Mahabharata, that of the feuding Kauravas and Pandavas, is prefaced by tales of earlier epochs when gods upheld cosmic order while asuras (anti-gods) strove to destroy it. Here, in an unusual instance of cooperation, six gods and an asura use the serpent Vasuki as a rope and Mount Mandara (Meru) as a stick to churn the great milk ocean. Their churning releases all the beneficial things held within the waters, including the elixir of immortality, the celestial steed, and the wish-granting tree. Although it depicts a great Hindu creation story, this painting features a figure clothed in a turban and jama, typical Mughal court costume of the time. The delicately shaded trees spotting the horizon were likely inspired by Flemish engravings, while the flesh- and pink-colored vertical mass of rock is a Persian painting convention.

The Gods and Asuras Churn the Ocean of Milk 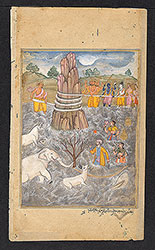 Razmnama Leaf, The Gods and Asuras Churn the Ocean of Milk 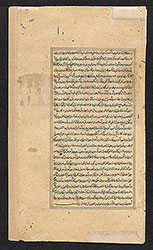 (1599). The Gods and Asuras Churn the Ocean of Milk. [Manuscripts]. Retrieved from https://libwww.freelibrary.org/digital/item/38970