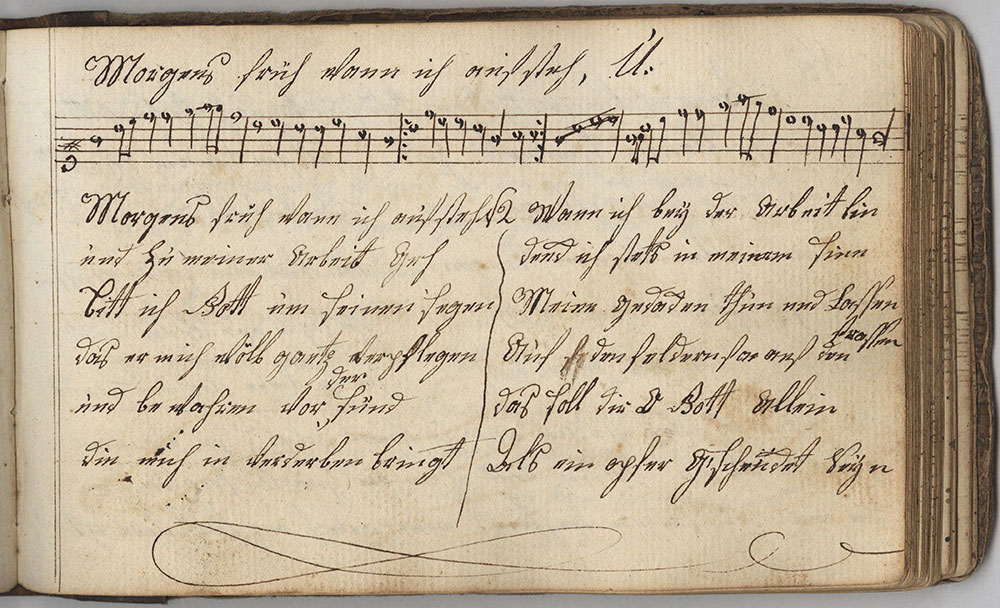 Accompanying Materials Laid or Tipped In:

[One quarter sheet of wove paper on which is written in capital block letters:] JACOB OBERHOLTZER | SCHOOL IN DEEP RUN | OCTOBER 25, 1803

David Kulp (1777-1834), formerly known as the Bucks County Brown Leaf Artist, studied under Johann Adam Eyer (1755-1855) from 1782-1786, and like him became a school teacher. He taught at the Deep Run and Plumstead schools from 1801 to ca. 1819. Kulp had a copybook that he kept from 1806-1822, and challenged anyone to exceed his writing skills: “David Kulp, his hand and pen, Beet [sic] it if you can.” As a Fraktur artist and penman, he designed and wrote with controlled architectural preciseness, but never lost the natural artistic flow of the work.

This tune booklet was made for Jacob Oberholtzer on October 25, 1803 by his school teacher David Kulp when Jacob was a student and singing scholar at the Deep Run School in Bucks County, Pennsylvania. Another tune booklet (see Borneman Ms. 31/ FLP B-10)) was made by Kulp for Elisabeth Oberholzer at the Plumstead School in Bucks County, Pennsylvania on November 1, 1803. A brief comparison of the title pages shows that the design is exactly the same; decorative elements are identical with the exception of ornaments used in the borders; handwriting matches. The hymn tunes and titles are exactly the same up to Nun Lobt und danckt Gott Psalm 105.  Because of differing numbering systems in both booklets the latter hymn is found on page [53] in Borneman Ms. 30, No. 22 and in Borneman Ms. 31 Hymn Nr. 87. Thereafter a few additional hymns with their tunes are added to Borneman Ms. 31, but the order of Borneman Ms. 30 prevails, and all hymns and tunes from Borneman Ms. 30 are contained in Borneman Ms. 31. The latter, which is the smaller of the two tune booklets ends at Nr. 138 Komm heiliger geist, Erfülle die H[ertzen]:... located on page [77] in Borneman Ms. 30.

The Jacob Oberholtzer Tune booklet discontinues its numbering format of four hymns and respective tunes per page as all identified under one No. _ _, at No. 44. The handwriting and type of notation change at this point, indicating that more than one person contributed hymns—some with verses written out—and tunes to the booklet. From page [112] Es gieng ein Säman aus zu säen...[Mark 4:3] onwards, there are examples of musical notation in shape notes, and voicing in three voices—two treble, and bass. Voicing continues in three parts per hymn mostly with traditional notation to the end of the booklet. N.B. On page [138] inner note harmony is indicated in red against the treble in black ink. Also, Fraktur script and German script for German entries, as well as Roman script for English entries are used from this point on. Almost as an after thought at the end of the booklet on page [182] we find one stave devoted to rudimentary musical instruction in German: soprano clef, key signature for F Major (b) and G Major (#) with an ascending stepwise scale, the notes identified by their letter names. Following this notes are shown by their letter names at the octave, minor seventh, minor sixth perfect fifth, major third, minor third, perfect fourth, major third, minor third, major second, minor sixth, major third, major second, major second. Throughout the booklet the staves are all hand drawn, and up to No. 44 [p. 97] one finds four stave per page. Thereafter, the number varies according to the number of voices, and verses being copied per piece.

Evening Shade S M, the last piece to appear in Borneman Ms. 30, is on page [183]. Written in the alto clef, C major, and in 4/4 three lines of melody and one verse in English are copied out: “The Day is past and gone. The Evening Shade | appears, O may we all remember well, the night | of Death Draws Near.”

This tune booklet demonstrates the two worlds in which Pennsylvania German children and their teachers existed, and points towards their assimilation into American culture. Representative of their Germanic roots, we find on the one hand that the majority of hymn titles are from the Marburg Hymnal and copied out in Fraktur, and German script, along with the tune incipits in traditional notation. On the other hand, their exposure to the American way of life prompted them to add musical material in English such as the religiously inspired “The Day is Past and Gone” by the American Baptist minister John Leland. Neither Fraktur nor German script would be appropriate to copy English, and so the scrivener used Roman script to write out the verses in English. He/she also used a new form of musical notation, i.e. shape notes, a system introduced in 1801 to facilitate congregation and community singing, and soon to become a popular teaching device in American singing schools.

The idea of creating such a booklet to teach children the rudiments of musical notation so that they could learn to sing the melodies used in the hymns at church service seems to have been Johann Adam Eyer’s (1755-1837), David Kulp’s teacher. The hymnals used by their parents contained no music, but only the hymn verses with the indication “Mel.” and the title of the hymn tune to which the congregation would sing the text. The metrics, and topic of the poetry usually determined which melodies were chosen.

Hand-drawn; hand-colored; hand-lettered. The main text in Fraktur and German script is enclosed within a circle and in the center of the document. Two lines in Fraktur are written along the outer perimeter of the circle, one on each side: Lerne Wie du kanst allein [left side of circle] Singer buch Und Tempel seÿn [right side of circle]. The phrases are taken from the first verse of a poem found on page one of the Marburg Hymnal. The circle is flanked on each side by a stylized symmetrical long-stemmed flower. Two flower buds extending in opposite directions and connected by a tendril fill the space above the circle at the head and below the circle at the tail of the page. The entire document is framed by a decorative border. 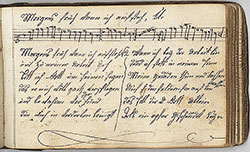