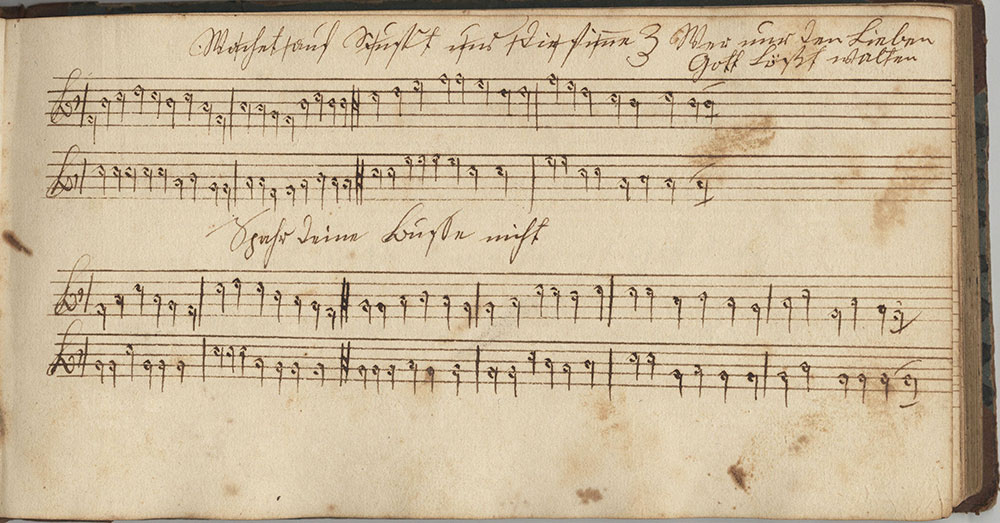 The decorator/scrivener of Borneman Ms. 44 remains unknown to us. However, it is worthwhile noting that like Johann Adam Eyer, the writer did include some rudimentary musical instruction in this tune booklet, as well as titles and melodies to hymn tunes taken from both Die kleine geistliche Harfe, the Marburg Hymnal, and Johann Friedrich Eyer’s and Isaac Gerhart’s Choral=Harmonie. Johann Friedrich Eyer is best known for his Fraktur, but was also an organist, and, after he moved to Selinsgrove, in Snyder County, along with the Reformed minister Isaac Gerhart, composed and compiled music for Choral Harmonie, a book intended to provide basic musical instruction, as well as hymns appropriate for all church denominations.

Die kleine geistliche Harfe was the first Mennonite hymnbook produced in America, prepared by a committee of the Franconia Mennonite Conference in Eastern Pennsylvania, and used in that conference district as the official hymnbook for over a century. It was printed at Germantown in 1803 by Michael Billmeyer. The German Lutherans of Pennsylvania imported their first hymnals from Europe. The most common were the Marburg Hymnal of 1711 and the Halle Hymnal of 1703. Christoph Saur printed six American editions of the Marburg Hymnal from 1757 to 1777, which was used by many other Pietistic groups including the Mennonites.

This Tune Booklet Belongs to Elisabet Christman of Upper Milford Township Lehigh County I Am Fond of This Book and Who Ever [from] Me... [Text fragment]

N. B. Inscribed on page [1] at the head in the center Elisabeth Christman Ihr sing Buch | Im Jahr 1819 ( Elisabeth Christman Her Tune Booklet in the Year 1819). The next 71 pages were used for hymn titles and music incipits. The following pp [72-136] were left blank. Someone at some point decided to make use of the blank pages in the tune booklet as a writing sample book, and turned it over so that an inscription in a different hand ____ [?] Masteller, as well Mel mein geist erstaund | Almechtiger ( _____ [?] Masteller... Mel [odie] My Spirit is Amazed | Almighty...) appears “upside down” on the inside back cover. He/she then self lined the last two leaves [pp 133-136] and wrote out exercises “upside down.” This means that when one text runs head-to-tail, the other runs tail-to-head. Like a tête-bêche, the two texts are bound together in a single spine, but unlike a tête-bêche, there is a back cover, and there are no double front covers.

The Notenbüchlein was made for Elisabet Christman by her school teacher ca. 1820 when she was a student and singing scholar in Upper Milford Township, Lehigh County, Pennsylvania. There is no rudimentary instruction included in this booklet. 30 hymn titles with their music incipits are formatted two titles/incipits on recto of page with the verso left blank. Two staves are reserved for each incipit. No other booklet in the collection is formatted in this way. The first 12 of the 30 music incipits are written in shape notes; the remaining 18 are indicated in traditional notation. The clef throughout is g-clef, but drawn as a German script majuscule B, also a peculiarity of this tune booklet.

Beginning on page [42], the format changes to 2 hymn titles per opening (two pages facing each other) with the incipits carrying over two pages, a blank opening, and then a repeat of the 2 hymn titles with incipits per opening, etc. Hymns 31-39 are written in shape notes. Hymn 40 is notated in traditional notation. The clef sign at page [63] becomes a calligraphic flourish for g-clef. The notation becomes a fermata sign with a tail. There are no hymn titles, only music incipits with two incipits per page in open format up to page [67] where a traditional alto clef sign is used for one of the melodic incipits. A traditional alto clef sign also appears on page [70] with the music incipit written in the fermata/tail pattern. No hymn titles are given for pages [72-73]. Rather text appears above ( ist der ___ [?] gestilt Ich eile Jez ganz neu belebt dem Hügel zu‚ Dort wo am Kreuze Jesu schwebt dort find ich selen ruh ) and below (Dort hängt [?] mein Heil im blut die lebend quellet quilt der ganzen welt und mier zu gut nun...) the first stave. The music incipit is notated for two voices—treble and bass—using shape notes. The remaining pages [74-136] are blank.

This tune booklet demonstrates the two worlds in which Pennsylvania German children and their teachers existed, and points towards their assimilation into American culture. Representative of their Germanic roots, we find hymn titles from the Marburg Hymnal and Die kleine geistliche Harfe der Kinder Zions and copied out in Fraktur, and German script. However, although some of the incipits are in traditional notation, this tune booklet in particular shows many variances with a bit of creative artistic license. We find the scrivener using a new form of musical notation, i.e. shape notes, a system introduced in 1801 to facilitate congregation and community singing, and soon to become a popular teaching device in American singing schools.

Hand-drawn; hand-colored; hand-lettered. The title page is placed on an opening (two pages facing each other) with ownership particulars on the left and on the right the first few lines from a hymn text Ich Will Vonn meiner miisethad... (I wish to turn from my bad ways...) written by Luise Henriette (1627- 1667), Electress, consort of Friedrich Wilhelm, Elector of Brandenburg, ca. 1653. The text of both pages is in Fraktur with highly ornamented initial letters, and is framed by an undulating leaf and flower patterned border.

The idea of creating such a booklet to teach children the rudiments of musical notation so that they could learn to sing the melodies used in the hymns at church service seems to have been Johann Adam Eyer’s (1755-1837), David Kulp’s teacher. The hymnals used by their parents contained no music, but only the hymn verses with the indication “Mel.” and the title of the hymn tune to which the congregation would sing the text. The metrics, and topic of the poetry usually determined which melodies were chosen.