Let Everyone Take Care Of Himself 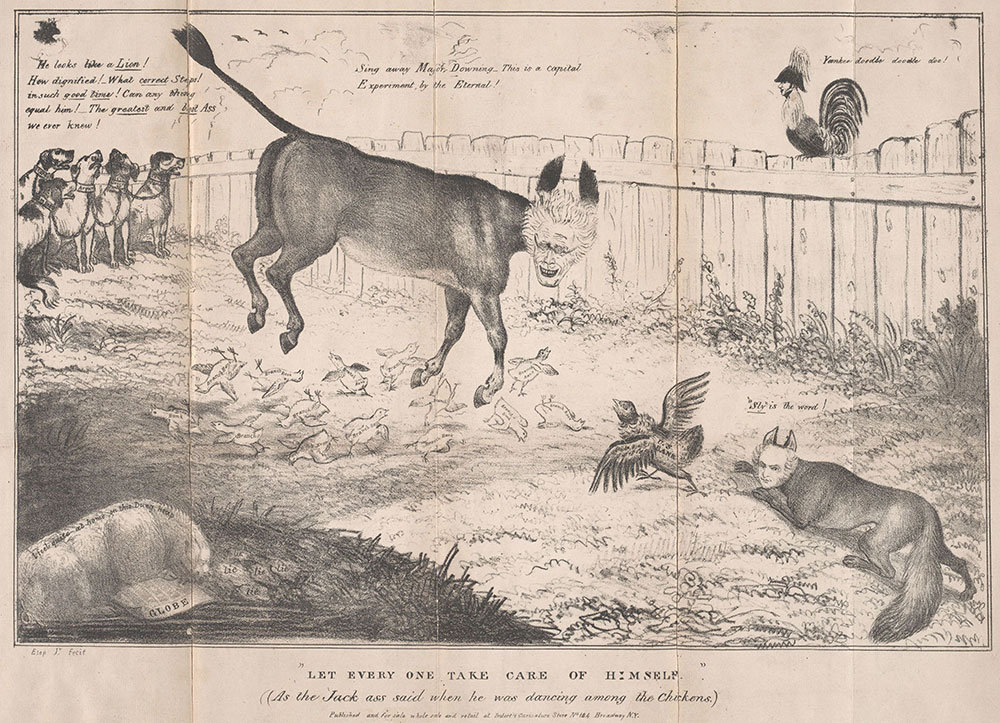 From the Library of Congress digital collections:

"A satire attacking Andrew Jackson's plan to distribute treasury funds, formerly kept in the Bank of the United States, among "branch banks" in various states. The artist also alleges Vice-President Van Buren's manipulation of administration fiscal policy. Jackson appears as a jack-ass "dancing among the Chickens" (the branch banks) to the alarm of the hen "U.S.Bank." Martin Van Buren, as a fox, and Jack Downing, as a cock, look on. On the left sit five chained dogs, representing the "Albany Argus, Journal of Commerce," and other newspapers sympathetic to Jackson's program. In the left foreground a sow with the head of Jackson advisor Francis Preston Blair lies on a copy of his newspaper, the "Globe." Jack Downing: "Yankee doodle doodle doo!" Jackson: "Sing away Major Downing. This is a capital Experiment by the Eternal!" Dogs: "He looks like a "Lion!" How dignified! What "correct" Steps! in such "good time!" Can any thing equal him! The "greatest" and "best" Ass we ever knew!" Blair: "I feel quite at home on this dung heap." Van Buren: ""Sly" is the word!""

(ca. 1833). Let Everyone Take Care Of Himself. [Cartoons (Commentary)]. Retrieved from https://libwww.freelibrary.org/digital/item/42769