The Pedlar and his Pack or The Desperate Effort, an Over Balance 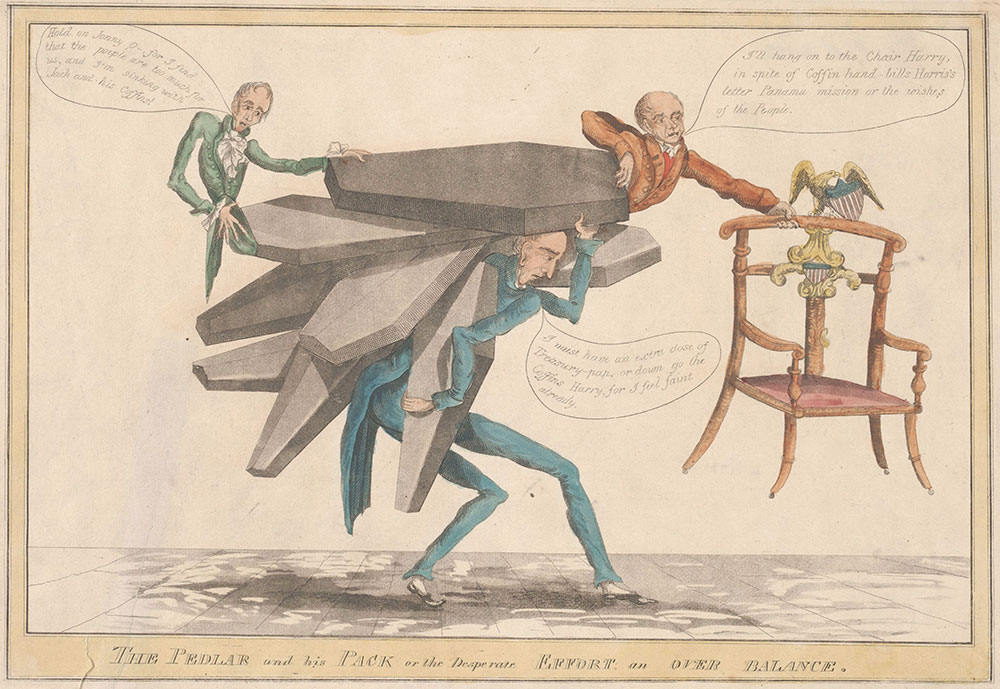 Item No: PIXC00058
Title: The Pedlar and his Pack or The Desperate Effort, an Over Balance
Publication Year: 1828
Media Type: Cartoons (Commentary)
Source: Print and Picture Collection
Notes:

From Nevins & Weitenkampf's A Century of Political Cartoons:

"This cartoon shows three prominent figures on the losing side, [John Quincy] Adams, his Secretary of State Henry Clay, and editor John Binns, while it hits off the discreditable campaign episode for which Binns was responsible. The editor of the Philadelphia Democratic Press believed that [Andrew] Jackson was an irresponsible tyrant. Early in the campaign he widely circulated his famous "coffin handbills,"  pictures of eight coffins bearing names of soldiers whom Jackson had commanded shot when they quit service at the end of their enlistments, but while the enemy was still in the field. Binns overshot his mark. A mob attacked his house; his newspaper was discontinued; and the handbills created sympathy for Jackson. Adams, vainly trying to hold on to his Presidential chair, speaks of  pet project which Clay had pressed - the sending of American delegates to the Panama Congress of Latin-American States proposed by Bolivar. Clay laments "the people are too much for us." Adams lost to Jackson in the electoral college by 178 to 83, and in the popular vote by about 650,000 to 500,000."

Hold on Jonny O-, for I find
that the people are too much for
us, and I'm sinking with
Jack and his Coffins!

I must have an extra dose of
Treasury-pap,- or down go the
Coffins Harry, for I feel faint
already.

I'll hang on to the Chair Harry,
in spite of Coffin hand-bills Harris's
letter Panama mission or the wishes
of the People.