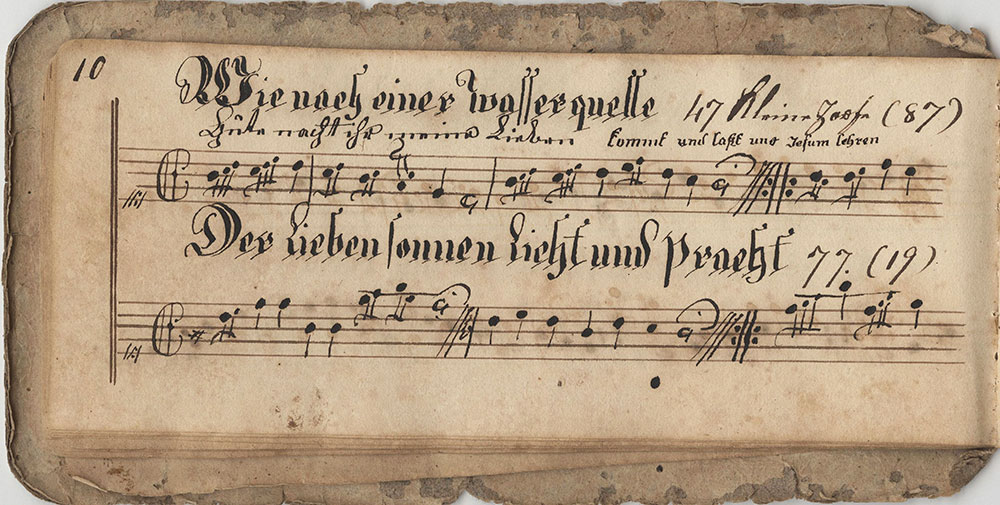 In the 1780s Peter Lehman, a hermit, and admirer of the Ephrata Cloisters’ way of life, was persuaded by Peter Miller—prior of the Ephrata Cloisters—to lead the church at Antietam, a German Seventh Day Adventists group. Barbara Karper Schneeberger was one of the faithful members of this church and, along with her husband Andreas Schneeberger frequently hosted meetings at their home. Peter Lehman preached regularly at Snow Hill, so that the Antietam congregation became the Snow Hill congregation. In the 1790s he urged his congregation to adopt the celibate lifestyle of the residents at Ephrata, and the establishment soon became known as Snow Hill Cloister.

The Snow Hill Cloister scriptorium was active from ca. 1820 to ca. 1840’s. Since Snow Hill was an offshoot of the Ephrata Cloisters, it is not surprising that the style of its hymnals was based on 18th century Ephrata examples. However, the illuminators at Snow Hill simplified and stylized their designs, using a plainer geometric bar illumination based on the 5 lines of a musical stave, and more rudimentary portrayals of other decorative elements. The Snow Hill manuscripts are readily identified by their wove paper, and a larger and more vivid palette of strong colors.

Scope and Content:
Hand-drawn; hand-lettered. The hymn titles are written in Fraktur. The music to the hymns is placed below the titles and is written in chant or one voice with clef and key signature; and extends across the page opening from verso to recto. The overall shape of the book is oblong.