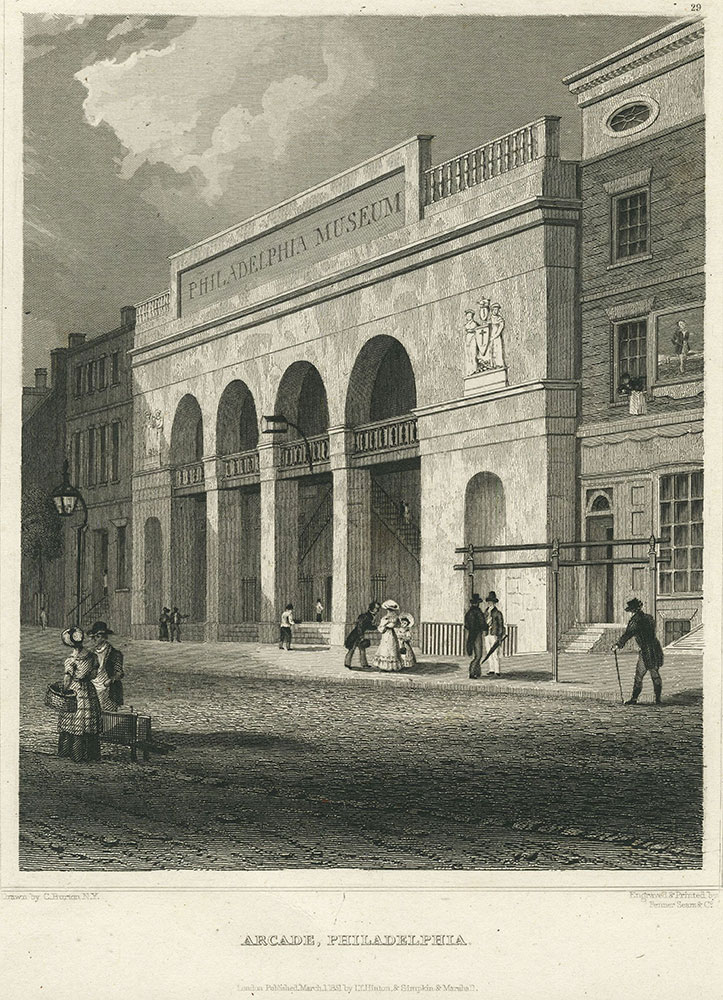 Depicts the Philadelphia Arcade. Built 1826-27 on the north side of Chestnut Street between Sixth and Seventh Street. Designed by John Haviland (1792-1852). One of the first American buildings to reflect clearly its commercial purpose in its plan. Served as one of the locations for Charles Willson Peale's Philadelphia Museum. After Dr. David Jayne bought the building the second and third stories were fitted up as a hotel. In 1863, Dr. Jayne tore down the Arcade and replaced it with five stores.

"On the 3d of May, 1826, the corner-stone was laid of a building which it was expected would be an ornament to the city and a successful business enterprise. As far as regarded appearance and architectural effect these hopes were fulfilled, but as a financial project the building was a failure. [...] The idea of its erection was borrowed from the city of London, where the Burlington Arcade, a collection of small retail shops in one building, was about this time successful. [...] The interior was divided into one large central building, on each side of which was a wide open avenue leading from street to street. [...] The third story was closed and used on all sides of the building by the Philadelphia Museum, the entrance to which was by the main stairway [...] Over the avenues (which were paved with flags) were two skylights, of the full width of each, for the purpose of giving light to the apartments below, and making the avenues in effect covered streets [...]" (Vol. 1, p. 617-618)