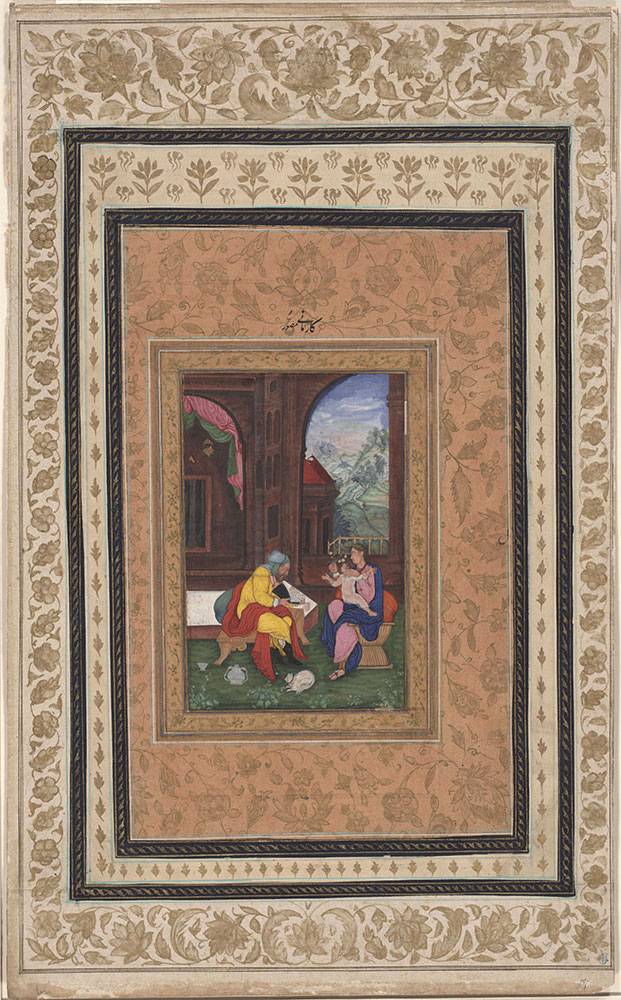 From the earliest stages in the development of Islamic Mughal painting, court artists consulted European paintings and prints. This painting is inspired by European Christian sources, showing Mary and Joseph with a book in Arabic.

A Persian inscription on the upper border of this album page reads 'kar-iMani musavvir" (work of Mani, the painter). An artist called Mani contributed to a number of illustrated manuscripts produced at Akbar's court, but no European-themed paintings are associated with his oeuvre. A more likely candidate for the authorship of this painting is Keshav Das (also known as Kesu Das), to whom is credited a range of paintings done after and inspired by European paintings.

This highly accomplished painting shows the Virgin and Child with St. Joseph, who sits enveloped in colorful, draping fabrics and holds a codex on whose pages are written an illegible text in Arabic script. While clearly inspired by a European print or painting, the original source has yet to be identified. A curious parallel can be found in Andrea del Sarto's Madonna del Sacco of 1525, which portrays St. Joseph in strict profile, one hand displaying an open book as the other rests on a sack. An engraving after this fresco, which is located in the Basilica della Santissima Annuziata, Florence, may very well have travelled to Akbar's court during the last decades of the 16th century. In the Mughal painter's hands, however, the Madonna del Sacco would have been radically transformed and further embellished, with the figure of St. Joseph and the prominent Italianate arches the only traces of the fresco's composition.

We are grateful to Yael Rice for the previous catalog entries excerpted from the exhibition catalog for "Akbar: The Great Emperor of India." 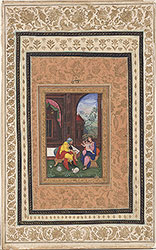 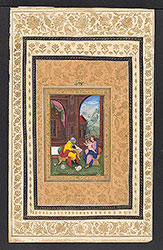 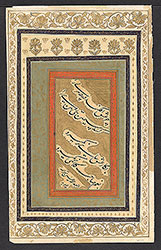 The Holy Family (Back)
Previous Previous