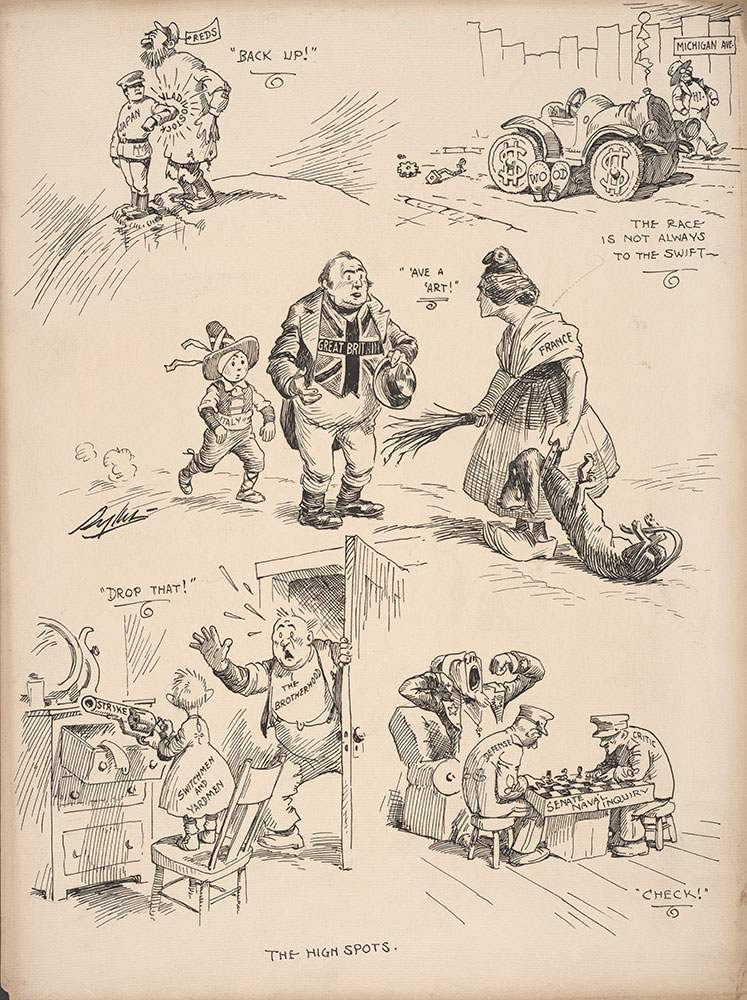 "Japanese troops today (Monday) occupied Vladivostok, after eight hours of fighting in all parts of the city.  The Japanese imperial flag is flying in the place of the Russian ensign from all government buildings.  Some of the officials of the revolutionary regime already have been arrested and deported.  All Russians have been disarmed."

"The Senate is likely to investigate the finances of the Wood campaign unless the Wood managers in the next few days open their books to the public....The Michigan returns today, which show that Wood has been swamped by Johnson, are adding force to the demand for inquiry."

"With nearly half of the precincts in the state tabulated this morning.  United States Senator Hiram Johnson had increased the lead he took last night over Major General Leonard Wood for the indorsement of the Michigan Republicans for the presidential nominations."

"Great Britain's open refusal to support France in her 'invasion' of Germany has been made in order to sustain the Muller government in Germany.  The danger which Great Britain, the United States and Italy saw in France's precipitate use of force to sustain the treaty which Germany had undoubtedly broken was that it would aid the revolutionists in Germany, stregthen the hands of Legien, the labor leader, and cause a fall of the Muller government."

"Is Chicago, birthplace of the 'outlaw' unions which called the first of the 'illegal' strikes, brotherhood heads and railroad officials asserted the situation was slightly improved today.

"Although passenger, mail and milk trains at Detroit were moving virtually on normal schedules, according to railroad officials, the tieup of freight movement, due to the unauthorized strike of switchmen in yards and in other MIchigan citities was virtually complete this morning.  A meeting of 500 yardmen employed on cleveland railroads adjourned at noon today after the men had voted to go on strike at 2 o'clock this afternoon."

"Two years before the United States joined the Allies in the world war the navy general board prepared a comprehensive plan for war against a 'central power' of Europe.  Rear Admiral F. F. Fletcher today told the Senate investigating committee.  It was replying to Rear Admiral Sim's charge that when the United States entered the war the Navy Department had no 'well-considered' plans or policies for fighting Germany.

"Many such plans had been made in the past.  Admiral Fletcher said, but the plan referred to 'covered every phase of naval operations under the assumed conditions of war.'  It dealt with the mobilization, organization and composition of the fleet., its dispositionedand employment, protection of the coasts, bases of supplies on the United States coast and in the West Indies, routes across the Atlantic and the enemy's forces and probable courses of action, he said, and comprised nearly 300 type-written pages."