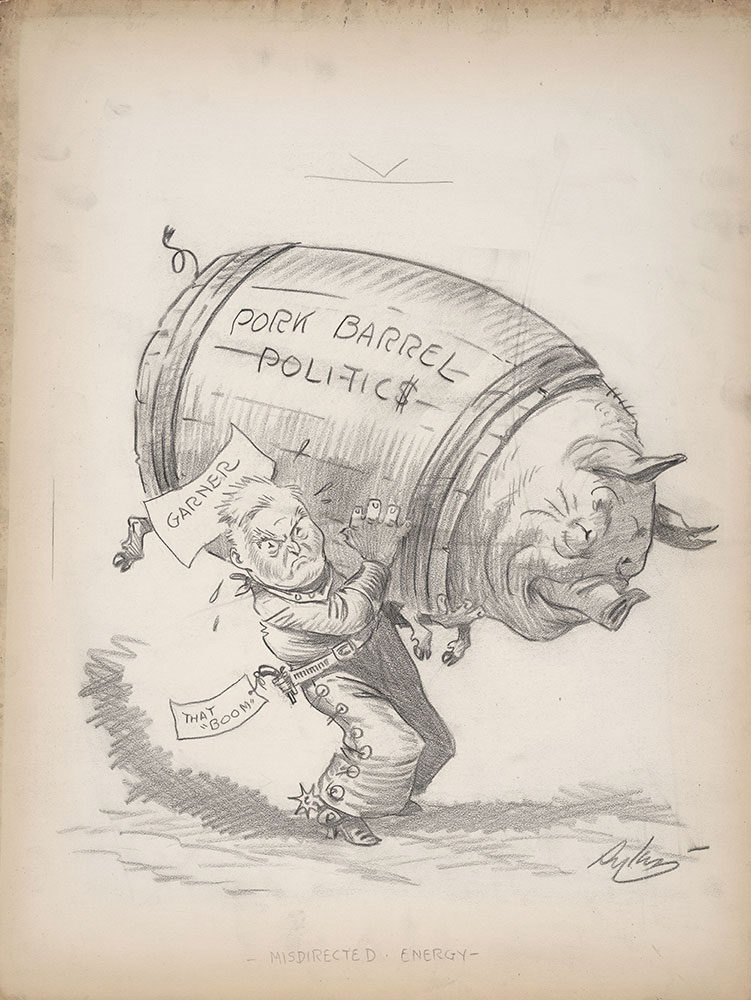 1910s:  "Garner, whose political base was built on pork barrel politics, ironically began to develop a reputation as a protector of the public purse."

1916:  "Representative Garner, Of Texas--'There are a half dozen places in my district where Federal buildings are being erected or have recently been constructed at a cost to the Government far in excess of the actual needs of the communities where they are located.  Take Uvalde, my home town, for isntance.  We are putting up a postoffice down there at a cost of $60,000, when a $5,000 building would be entirely adequate for our needs.  This is mighty bad for business for Uncle Sam, and I'll admit it; but the other fellows in Congress have been doing it for a long time and I can't make them quit.  Now we Democrats are in charge of the House, and I'll tell you right now, every time one of these Yankees gets a ham I'm going to do my best to get a hog.'"

1932:  "By 1932, however, the overwhelming consensus among congressional Democrats and the public against the sales tax and in favor of additional relief measures convinced Garner to repudiate Hoover's program. He proposed his own federal relief spending bill through a massive public works program. This action was highly uncharacteristic, given his reluctance to offer his own proposals and his long record of opposition to increased government spending. Hoover vetoed the bill, condemning it as 'the most gigantic pork barrel raid ever proposed to an American Congress!'"

1932:  "Hearst has been charged with a desire to secure a sales tax by trying to place the Speaker of the House under an obligation by bomming him, Garner, for the presidency."

Pork barrel:  a bill or project requiring considerable government spending in a locality to the benefit of the legislator's constituents

Boom:  to boost, campaign for vigorously; or, a rise in popularity