Charter of the Free Library of Philadelphia 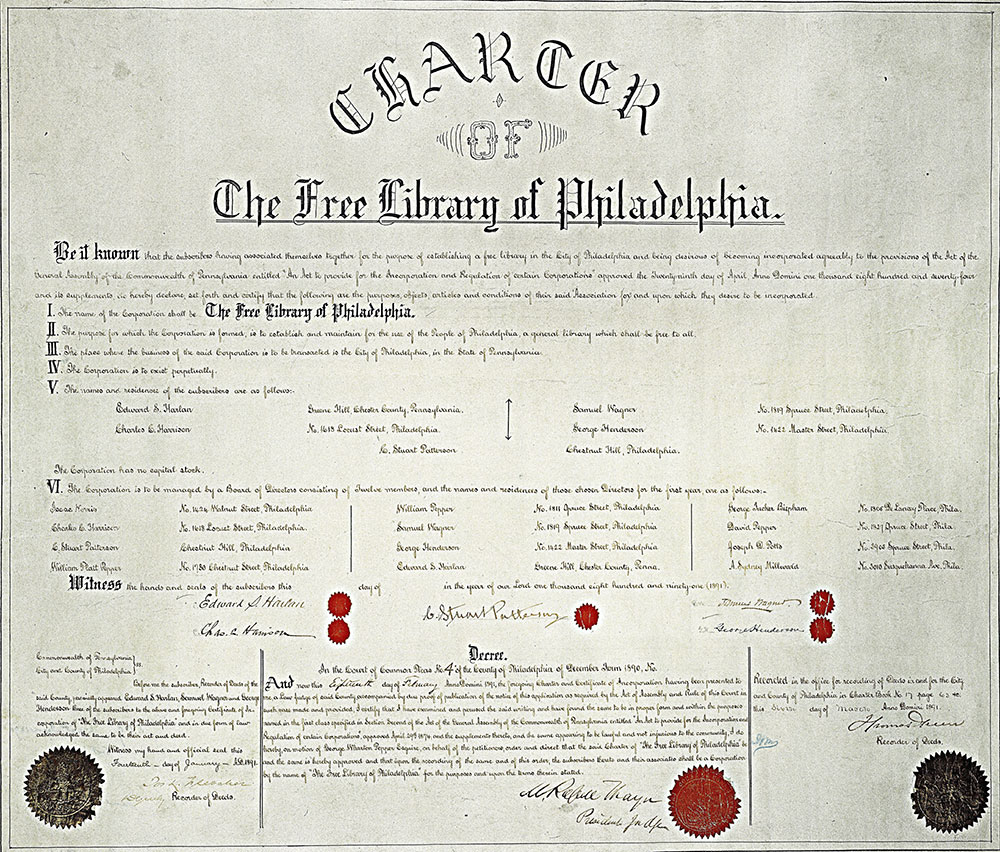 Charter
of
the Free Library of Philadelphia

Be it known that the subscribers having associated themselves together for the purpose of establishing a free library in the City of Philadelphia and being desirous of becoming incorporated agreeably to the provisions of the Act of the General Assembly of the Commonwealth of Pennsylvania entitled "An Act to provide for the Incorporation and Regulation of certain Corporations" approved the Twenty-ninth day of April, Anno Domini one thousand eight hundred and seventy-four and its supplements do hereby declare, set forth and certify that the following are the purposes, objects, articles and conditions of their said Association for and upon which they desire to be incorporated.

The Corporation has no capital stock.

VI. The Corporation is to managed by a Board of Directors consisting of Twelve members, and the names and residences of those chosen Directors for the first year, are as follows:

Witness the hands and seals of the subscribers this     day of     in the year of our Lord one thousand eight hundred and ninety-one (1891).

Commonwealth of Pennsylvania
City and County of Philadelphia
Before me the subscriber, Recorder of Deeds of the said County, personally appeared Edward S. Harlan, Samuel Wagner and George Henderson three of the subscribers to the above and foregoing Certificate of Incorporation of "The Free Library of Philadelphia" and in due form of law acknowledged the same to be their act and deed.
Witness my hand and official seal this Fourteenth - day of January - A.D. 1891
Jos. K. Flescher (signature)
Deputy Recorder of Deeds

Decree.
In the Court of Common Pleas No. 4 of the County of Philadelphia of December Term 1890, No.
And

Charter of the Free Library of Philadelphia. [Realia]. Retrieved from https://libwww.freelibrary.org/digital/item/604