How to Avoid Influenza (in Polish) 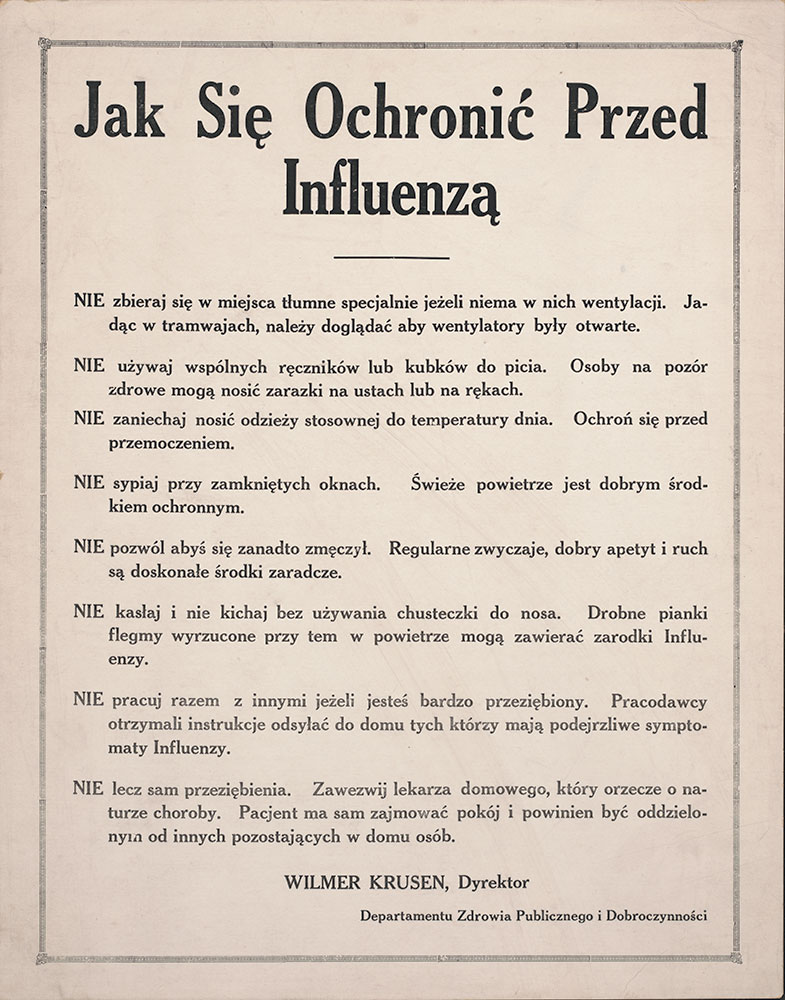 This October 1918 poster was created in response to the virulent “Spanish Flu” (later called the swine flu, and today, the H1N1 virus), which affected Philadelphia for a year, beginning in September 1918.  These posters were printed in many languages, to make sure all residents of Philadelphia were informed.  To see this poster in English, see item# twcp00076.

Regardless of the differing theories about where the epidemic started, it reached Philadelphia by early September 1918, after infected sailors from Boston came to the Philadelphia Navy Yard.  Once patients began appearing, it became apparent how ill-informed and ill-prepared the City was. World War I created demands for increased labor at home and doctors abroad.  This resulted in overcrowding in the city, and critical shortages of the doctors, hospital space, morgues, and burial services necessary to handle an out-of-control crisis.  Accelerating the devastation was the City’s refusal (against the advice of the medical experts) to cancel a rally for the Fourth Liberty Loan Campaign, which brought 200,000 Philadelphians together on Broad Street, on September 28.  Within three days (the incubation period of the virus), the number of cases skyrocketed.

Unfortunately, this poster's warning to avoid crowds came too late for many Philadelphians.  The epidemic in Philadelphia claimed 16,000 lives altogether, with 12,000 of those deaths occurring in the five-week period immediately following that war bonds rally.  Per capita, Philadelphia was the city hardest hit in America by the epidemic.

Wilmer Krusen, Department of Public Health and Charities - Director. How to Avoid Influenza (in Polish). [Posters]. Retrieved from https://libwww.freelibrary.org/digital/item/65054