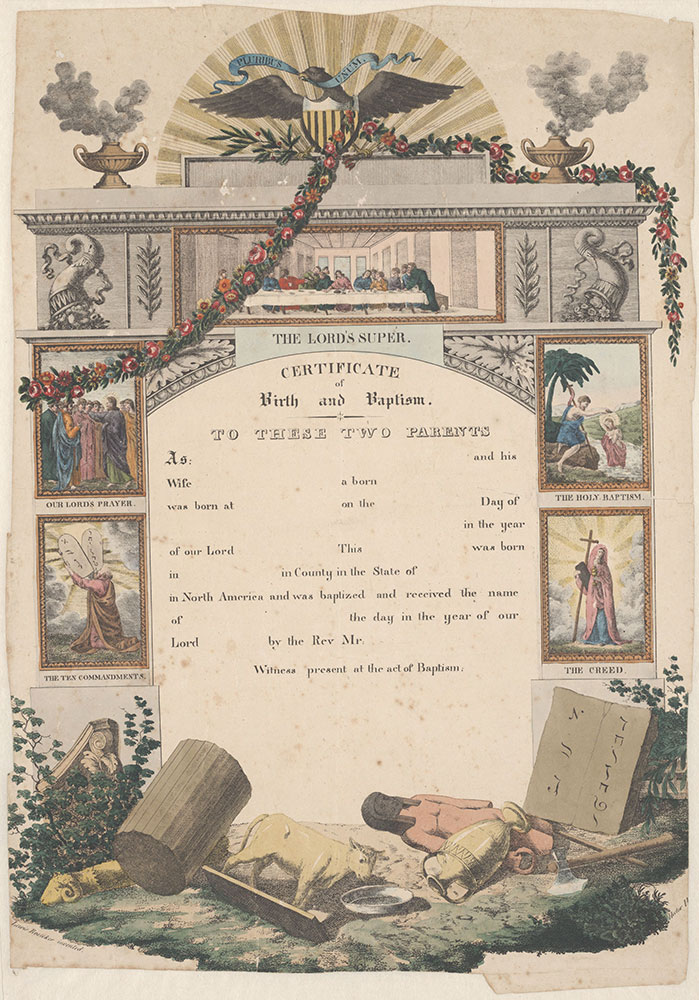 [captions on left]
OUR LORD’S PRAYER
THE TEN COMMANDMENTS

[captions on right]
THE HOLY BAPTISM
THE CREED

Printed form. The main text is within a large arch flanked by two columns with framed images of biblical scenes. On the left is an image of Jesus and his disciples. Below it is an image of Moses receiving the tablet with the Ten Commandments. On the right is a framed image of Jesus being baptized in the river Jordan. Below it is a picture of a woman holding a cross, the bible and an urn with holy water (The Creed). At the top of the arch is an image of the Lord’s Supper flanked by cornucopias. Above it is a spread-winged eagle bearing a shield, with a banner in its beak. A garland of flowers extends on top and across the arch. Two urns with smoke billowing from them are on the top of the arch. At the bottom is a scene of discarded relics, including a statue of the Golden Calf, an urn, a column fragment, a statue, an axe, and two tablets with inscriptions in Hebrew.

This certificate is one of only two extant copies known, sold through a Philadelphia printshop called the German European Book and Print Store.  The printer of the certificate is unknown.  Also produced in a German-language edition, this particular copy has lost the bookstore’s imprint at the bottom of the page. It is possible that these certificates were actually printed in Germany for the American market, and distributed through this printshop. The engraver, Hector Heideloff, was likely a member of the German Heideloff family of etchers and engravers. Similar certificates were printed in Reutlingen, Germany from about 1830-1860 by Benjamin Gottlob Kurtz (1787-1845) and his relative Carl Gottlob Kurtz (?-1865). See FLP 271 for a German-language example by the Kurtz printshop. 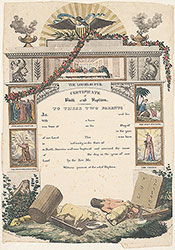