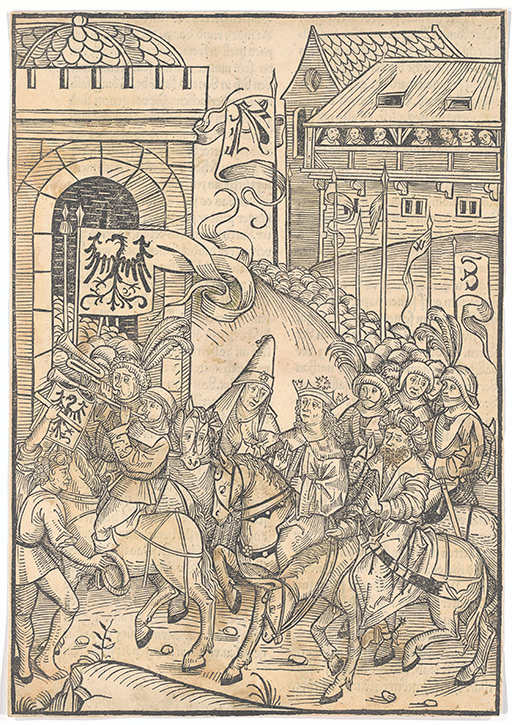 "32 King David said, "Call in Zadok the priest, Nathan the prophet and Benaiah son of Jehoiada." When they came before the king, 33 he said to them: "Take your lord's servants with you and set Solomon my son on my own mule and take him down to Gihon. 34 There have Zadok the priest and Nathan the prophet anoint him king over Israel. Blow the trumpet and shout, 'Long live King Solomon!' 35 Then you are to go up with him, and he is to come and sit on my throne and reign in my place. I have appointed him ruler over Israel and Judah."

38 So Zadok the priest, Nathan the prophet, Benaiah son of Jehoiada, the Kerethites and the Pelethites went down and put Solomon on King David's mule and escorted him to Gihon. 39 Zadok the priest took the horn of oil from the sacred tent and anointed Solomon. Then they sounded the trumpet and all the people shouted, "Long live King Solomon!" 40 And all the people went up after him, playing flutes and rejoicing greatly, so that the ground shook with the sound.

41 Adonijah and all the guests who were with him heard it as they were finishing their feast. On hearing the sound of the trumpet, Joab asked, "What's the meaning of all the noise in the city?"

42 Even as he was speaking, Jonathan son of Abiathar the priest arrived. Adonijah said, "Come in. A worthy man like you must be bringing good news."

43 "Not at all!" Jonathan answered. "Our lord King David has made Solomon king. 44 The king has sent with him Zadok the priest, Nathan the prophet, Benaiah son of Jehoiada, the Kerethites and the Pelethites, and they have put him on the king's mule, 45 and Zadok the priest and Nathan the prophet have anointed him king at Gihon. From there they have gone up cheering, and the city resounds with it. That's the noise you hear. 46 Moreover, Solomon has taken his seat on the royal throne. 47 Also, the royal officials have come to congratulate our lord King David, saying, 'May your God make Solomon's name more famous than yours and his throne greater than yours!' And the king bowed in worship on his bed 48 and said, 'Praise be to the LORD, the God of Israel, who has allowed my eyes to see a successor on my throne today.' " (1 Kings 1 (New International Version): 32-49)