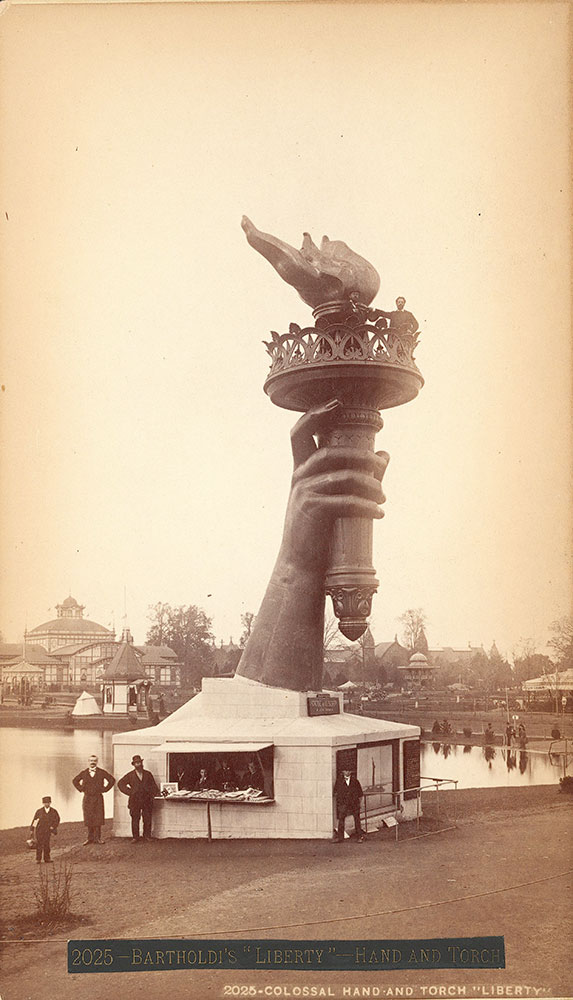 Item No: c012025
Title: Colossal hand and torch, Liberty
Additional Title: Bartholdi's "Liberty"- Hand and Torch
Series: Photograph Series I
Media Type: Albumen Prints
Notes: "Arm and hand of the Statue of Liberty. The arm and hand of Bartholdi's 'Liberty Enlightening the World' were all that had been completed of the colossal sculpture in 1876, and figured prominently as a popular attraction. Literature available at the kiosk at the base informed visitors of the details of Bartholdi's plan and invited subscriptions of ten cents to one hundred dollars toward payment for a pedestal for the completed statue. After the Exposition closed the sculpture was transported to New York, where it was exhibited in Madison Square."--Looney. Old Philadelphia, p.214.
Notes: 1 stereograph; 18 x 13 cm.
Notes: Architects: New York "Tribune" Building -- E.E. Rath; Women's Pavilion -- H.J. Schwarzmann.
Notes: Free-standing hand and torch from the Statue of Liberty mounted on subscription kiosk. Figures at the base of structure and one man at the hilt of the torch. In background is New York "Tribune" Building, Women's Pavilion, and Drinking Fountain.
Notes: Mounted on backing board.
Notes: The "Liberty" hand and torch was designed by Frederic Bartholdi; the Drinking Fountain was erected by the Sons of Temperance of Pennsylvania.
Notes: Titles on labels: Bartholdi's "Liberty" -- Hand and torch, and: Colossal hand and torch "Liberty".
Creator Name: Centennial Photographic Co.