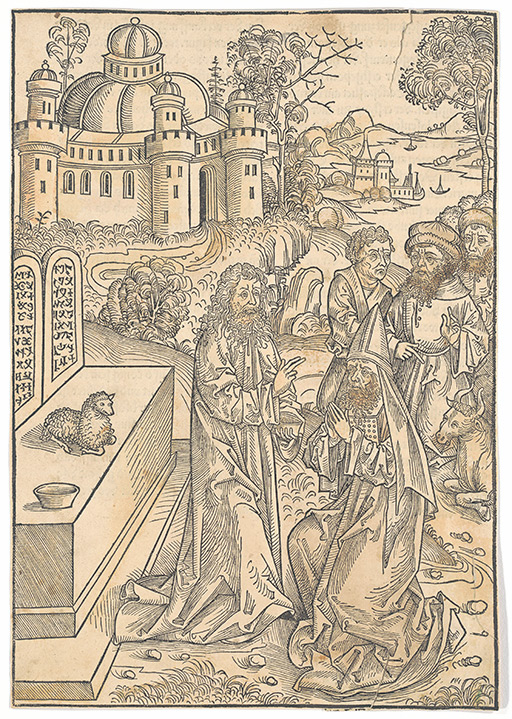 Consecration of the Priests:

"1 "This is what you are to do to consecrate them, so they may serve me as priests: Take a young bull and two rams without defect. 2 And from fine wheat flour, without yeast, make bread, and cakes mixed with oil, and wafers spread with oil. 3 Put them in a basket and present them in it—along with the bull and the two rams. 4 Then bring Aaron and his sons to the entrance to the Tent of Meeting and wash them with water. 5 Take the garments and dress Aaron with the tunic, the robe of the ephod, the ephod itself and the breastpiece. Fasten the ephod on him by its skillfully woven waistband. 6 Put the turban on his head and attach the sacred diadem to the turban. 7 Take the anointing oil and anoint him by pouring it on his head. 8 Bring his sons and dress them in tunics 9 and put headbands on them. Then tie sashes on Aaron and his sons. The priesthood is theirs by a lasting ordinance. In this way you shall ordain Aaron and his sons.

10 "Bring the bull to the front of the Tent of Meeting, and Aaron and his sons shall lay their hands on its head. 11 Slaughter it in the LORD's presence at the entrance to the Tent of Meeting. 12 Take some of the bull's blood and put it on the horns of the altar with your finger, and pour out the rest of it at the base of the altar. 13 Then take all the fat around the inner parts, the covering of the liver, and both kidneys with the fat on them, and burn them on the altar. 14 But burn the bull's flesh and its hide and its offal outside the camp. It is a sin offering.

15 "Take one of the rams, and Aaron and his sons shall lay their hands on its head. 16 Slaughter it and take the blood and sprinkle it against the altar on all sides. 17 Cut the ram into pieces and wash the inner parts and the legs, putting them with the head and the other pieces. 18 Then burn the entire ram on the altar. It is a burnt offering to the LORD, a pleasing aroma, an offering made to the LORD by fire.

22 "Take from this ram the fat, the fat tail, the fat around the inner parts, the covering of the liver, both kidneys with the fat on them, and the right thigh. (This is the ram for the ordination.) 23 From the basket of bread made without yeast, which is before the LORD, take a loaf, and a cake made with oil, and a wafer. 24 Put all these in the hands of Aaron and his sons and wave them before the LORD as a wave offering. 25 Then take them from their hands and burn them on the altar along with the burnt offering for a pleasing aroma to the LORD, an offering made to the LORD by fire. 26 After you take the breast of the ram for Aaron's ordination, wave it before the LORD as a wave offering, and it will be your share.

29 "Aaron's sacred garments will belong to his descendants so that they can be anointed and ordained in them. 30 The son who succeeds him as priest and comes to the Tent of Meeting to minister in the Holy Place is to wear them seven days.

31 "Take the ram for the ordination and cook the meat in a sacred place. 32 At the entrance to the Tent of Meeting, Aaron and his sons are to eat the meat of the ram and the bread that is in the basket. 33 They are to eat these offerings by which atonement was made for their ordination and consecration. But no one else may eat them, because they are sacred. 34 And if any of the meat of the ordination ram or any bread is left over till morning, burn it up. It must not be eaten, because it is sacred.

38 "This is what you are to offer on the altar regularly each day: two lambs a year old. 39 Offer one in the morning and the other at twilight. 40 With the first lamb offer a tenth of an ephah of fine flour mixed with a quarter of a hin  of oil from pressed olives, and a quarter of a hin of wine as a drink offering. 41 Sacrifice the other lamb at twilight with the same grain offering and its drink offering as in the morning—a pleasing aroma, an offering made to the LORD by fire.

42 "For the generations to come this burnt offering is to be made regularly at the entrance to the Tent of Meeting before the LORD. There I will meet you and speak to you; 43 there also I will meet with the Israelites, and the place will be consecrated by my glory.