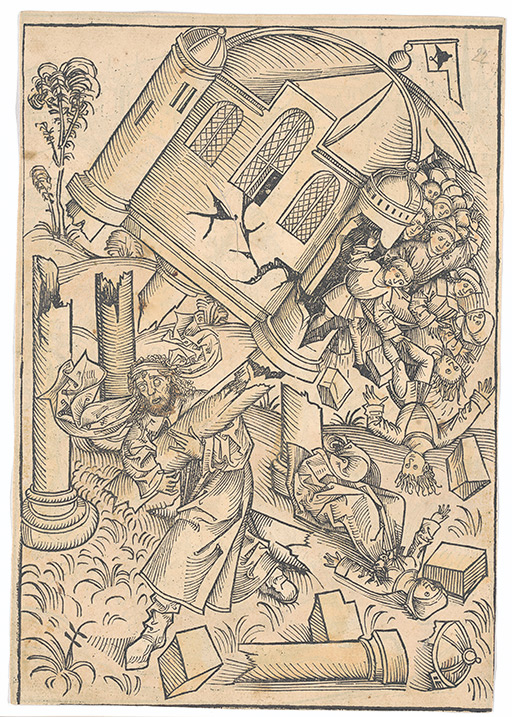 The Death of Samson:

"23 Now the rulers of the Philistines assembled to offer a great sacrifice to Dagon their god and to celebrate, saying, "Our god has delivered Samson, our enemy, into our hands."

24 When the people saw him, they praised their god, saying,
"Our god has delivered our enemy
into our hands,
the one who laid waste our land
and multiplied our slain."

25 While they were in high spirits, they shouted, "Bring out Samson to entertain us." So they called Samson out of the prison, and he performed for them.
When they stood him among the pillars, 26 Samson said to the servant who held his hand, "Put me where I can feel the pillars that support the temple, so that I may lean against them." 27 Now the temple was crowded with men and women; all the rulers of the Philistines were there, and on the roof were about three thousand men and women watching Samson perform. 28 Then Samson prayed to the LORD, "O Sovereign LORD, remember me. O God, please strengthen me just once more, and let me with one blow get revenge on the Philistines for my two eyes." 29 Then Samson reached toward the two central pillars on which the temple stood. Bracing himself against them, his right hand on the one and his left hand on the other, 30 Samson said, "Let me die with the Philistines!" Then he pushed with all his might, and down came the temple on the rulers and all the people in it. Thus he killed many more when he died than while he lived.

31 Then his brothers and his father's whole family went down to get him. They brought him back and buried him between Zorah and Eshtaol in the tomb of Manoah his father. He had led Israel twenty years."  (Judges 16 (New International Version):  23-31)