The Paschalville Library will be closed starting Friday, November 18 for renovations included as part of the City's Rebuild Program. You may find out more about these renovations on our Renovations and Closings page. 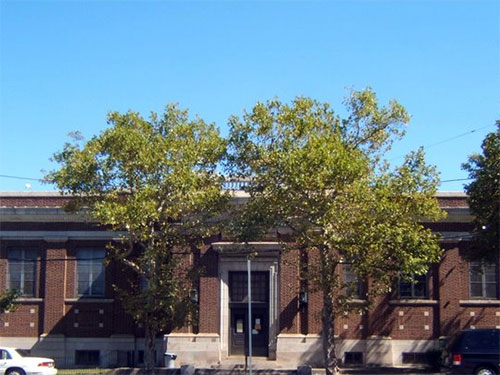 Donate to Paschalville Library
Nearby Libraries

Located on Woodland Avenue, this branch serves the communities of Paschalville and Elmwood.

Read more about both locations of the Southwest Job Readiness Labs in this blog post on the Free Library's website.The Southwest Job Readiness Labs are part of the Paschalville Partnership, a Free Library-led collaboration of 11 organizations working to transform services for job seekers in Southwest Philadelphia, which is made possible in part by the Institute of Museum and Library Services.

Paschalville Library has been selected as a location for renovation through the City of Philadelphia's REBUILD program. To find out more about the renovation process and to make sure your voice is being heard, visit https://yourpaschal.org/ and sign up for REBUILD updates and community meeting announcements. We plan to break ground in late 2022.

Paschalville was originally part of Kingsessing Township, one of the thirteen original townships that make up present-day Philadelphia. It was settled by the Swedes around 1643. Johann Printz, the third governor of New Sweden, erected the state's first water and grist mill at Cobbs Creek near the current intersection of 73rd Street and Woodland Avenue. There are still holes in the rocks said to have been for mill support.

The Paschalville Branch is located on Woodland Avenue, one of the oldest roads in Pennsylvania. Originally a trail used by Native Americans, the Swedes developed it into a road. In 1696, the English named it The King's Highway, one of many names for the road. It was a vital link between Philadelphia and the Southern colonies, and both English and colonial troops traveled it during the Revolution.

The actual village of Paschalville was established in 1810 when Dr. Henry Paschal laid out its boundaries. He was a descendant of Thomas Paschal who came to the colonies in 1681 and purchased a 500-acre tract from William Penn. In 1857, the Philadelphia and Darby Passenger Railroad started a line along Woodland Avenue.

Paschalville has been a branch of the Free Library since March 9, 1900 when Maurice Fels of the Fels Naptha Soap Company spearheaded efforts to build a branch library in the community. The first library was housed in the Sparks Building at the Saint James of Kingsessing Church.

The present building opened to the public on April 20, 1915. More than 200 community residents came to the dedication. The building cost $52,095 to construct and was the 17th library building to be erected using funds provided by Andrew Carnegie.

The library received new floor lights, drapes and furniture in 1962, and a plaque on the exterior of the building honors the men and women of Paschalville who died in World War I. A local veteran's organization still holds commemorative ceremonies at the plaque every Memorial Day and Fourth of July.

The library was renovated in 1995 as part of the "Changing Lives" campaign, which refurbished branch libraries and brought Internet service to every library.