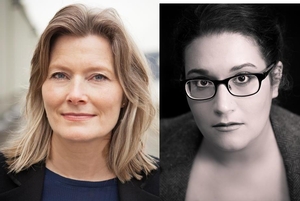 Jennifer Egan won the Pulitzer Prize and the National Book Critics Circle Award for the novel A Visit from the Goon Squad. Her other books of fiction include the National Book Award Finalist Look at Me, the bestselling The Keep, and The Invisible Circus, which was adapted into a movie starring Cameron Diaz. Her work has appeared in The New York Times Magazine, Harper’s, and McSweeney’s, among an array of other publications. Manhattan Beach is a historical novel about the transformative moments before and after the Great Depression.

The Artist in Residence at the University of Pennsylvania, Carmen Maria Machado has published work in Granta, in The New Yorker, and elsewhere. She has been nominated for a Nebula Award and a Shirley Jackson Award and was a finalist for the Calvino Prize. She has received residencies and fellowships from the University of Iowa and the Elizabeth George Foundation, among others, and is the author of the forthcoming memoir House in Indiana. In Machado’s debut collection Her Body and Other Stories, narratives “build and build until they surround and ensnare and at the end you’re always glad to be all tangled up” (NPR).