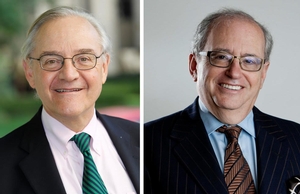 E.J. Dionne, Jr. and Norman J. Ornstein | One Nation After Trump: A Guide for the Perplexed, the Disillusioned, the Desperate, and the Not-Yet Deported

In conversation with Dick Polman, "Writer in Residence" at the University of Pennsylvania, and national political columnist at WHYY News

E.J. Dionne Jr. is a syndicated columnist who appears twice weekly in The Washington Post and nearly 100 other newspapers, a senior fellow at the Brookings Institution, and a professor at Georgetown University. A regular commentator on National Public Radio and on other radio and television programs, his New York Times bestselling books include Why the Right Went Wrong and the National Book Award-nominated Why Americans Hate Politics. Norman J. Ornstein is a former resident scholar at the American Enterprise Institute, and an editor and columnist for National Journal and The Atlantic. A fellow of the American Academy of Arts and Sciences, he is the coauthor of the New York Times bestselling book It’s Even Worse Than It Looks. In One Nation After Trump, Dionne and Ornstein lay bare the specific dangers of the Trump administration and argue for a populist alternative to the current president’s divisive rhetoric and policies.