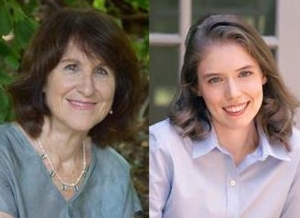 Margaret George | The Splendor Before the Dark: A Novel of the Emperor Nero with Madeline Miller | Circe

Margaret George’s fictional biographies of towering world figures—brimming “with lust, violence, cruelty and lively conversation” (Detroit Free Press) while adhering as closely as possible to the factual historical record—include Helen of Troy, The Memoirs of Cleopatra, The Autobiography of Henry VIII, and Mary, Called Magdalene, among many others. All have been international bestsellers. The sequel to The Confessions of Young Nero, George’s latest novel finds the titular tyrant earning his place in history as Rome’s most notorious ruler.

Madeline Miller is the author of The Song of Achilles, the “fast, true and incredibly rewarding” (USA Today) Orange Prize-winning reimagining of Homer’s The Iliad and its doomed champion. An Ivy League-educated classicist, for the last decade she has taught Latin, Greek, and Shakespeare to high school students. Miller’s latest novel, the New York Times number-one bestselling Circe, is a subversive revision of the story of the daughter of Helios, a witch, lover, and humanist who draws the ire of both gods and mortals.