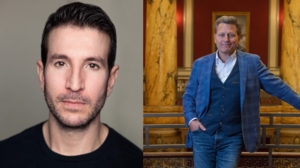 In conversation with David Baldacci, global #1 bestselling author whose books are published in over 45 languages and in more than 80 countries, with 150 million copies sold worldwide.

Alex Michaelides is the author of the #1 New York Times bestseller The Silent Patient, a debut thriller that blends “Hitchcockian suspense, Agatha Christie plotting, and Greek tragedy” (Entertainment Weekly) to tell the tale of a criminal psychotherapist’s quest to unravel a taciturn artist’s motivations for murder. A native of Cyprus, Michaelides studied English literature at Trinity College and screenwriting from the American Film Institute. In his new novel, a group therapist delves behind Cambridge University’s tranquil spires to investigate the murder of a young woman involved in a secret society known as The Maidens.

Signed books will be mailed after the event. Please allow circa three weeks for delivery.
U.S. orders only. All others will be refunded.