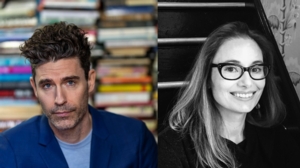 Joshua Ferris’s “brash, extravagant, and chillingly beautiful” (The New Yorker) novels include Then We Came to the End, winner of the 2008 PEN/Hemingway Award for best first novel and a finalist for the National Book Award; To Rise Again at a Decent Hour, which was shortlisted for the 2014 Man Booker Prize; and The Unnamed, the story of a lawyer who has the uncontrollable urge to walk and keep walking. One of The New Yorker’s “20 Under 40” writers and winner of the International Dylan Thomas Prize, Ferris is also the author of the short story collection The Dinner Party and has published fiction in Granta, Prairie Schooner, and Best American Voices, among other places. In A Calling for Charlie Barnes, a scheming malcontent finds redemption on an unlikely path.

Dana Spiotta is the author of five novels, including Wayward, which the New York Times called a "virtuosic, singular and very funny portrait of a woman seeking sanity and purpose in a world gone mad." Spiotta has been a finalist for the National Book Award and the National Book Critics Circle Award.  She was a recipient of a Guggenheim Fellowship, the Rome Prize, the St. Francis College Literary Prize, and the John Updike Prize from the American Academy of Arts and Letters.