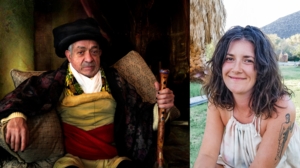 Recorded Nov 23, 2021
Play / pause
0:00
0:00
volume
Direct Download: 20211123-rabihal.mp3
Rabih Alameddine was a finalist for the National Book Critics Circle Award and the National Book Award for An Unnecessary Woman, a “paean to the transformative power of reading” (LA Review of Books). His many other works include the novels The Angel of History, The Hakawati, and the short story collection The Perv. The winner of the 2019 Dos Passos Prize, Alameddine was the recipient of a Guggenheim Fellowship, and has had solo gallery exhibitions of his paintings on three continents. In The Wrong End of the Telescope, a steadfast Arab American trans woman aids Syrian refugees on the island of Lesbos, and forms a close bond with a Syrian matriarch who is determined to protect her children and husband.

Claire Vaye Watkins’ debut story collection Battleborn was named a best book of 2012 by numerous periodicals. Her other work includes Gold Fame Citrus, a novel in which two young lovers squatting in an abandoned mansion find hope in a drought-wracked future Los Angeles. Watkins is a writing professor at the University of California, Irvine, and her stories and essays have appeared in Granta, One Story, The Paris Review, Ploughshares, and Glimmer Train. I Love You but I’ve Chosen Darkness is the “trippy and beautiful, slippery and seductive” (Vogue) story of a new mother who leaves for a speaking engagement in Reno, Nevada and ends up on a transformative journey through the Mojave Desert of her youth.