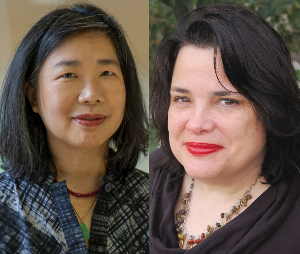 In conversation with Elizabeth McCracken

A debut “work of gorgeous, enduring prose” (The Washington Post), Lan Samantha Chang’s Hunger explored the lives of immigrant families haunted by the past. Her other writing includes the novels Inheritance and All Is Forgotten, Nothing Is Lost, as well as several other works of short fiction and nonfiction. The first Asian American and the first woman director of the Iowa Writers’ Workshop, Chang was a Berlin Prize fellow, won the PEN Open Book Award, and earned grants from the National Endowment for the Arts and the John Simon Guggenheim Foundation. In The Family Chao, a Chinese American family’s long-simmering resentments bubble to the surface amidst the mystery of its stern patriarch’s murder.

Evoking “moving depictions of marriage and parenthood, and love, betrayal, and loneliness” (The Boston Globe), Elizabeth McCracken’s seven books include Bowlaway, The Giant’s House, and Thunderstruck & Other Stories. A former faculty member at the Iowa Writers’ Workshop and currently the James Michener Chair for Fiction at the University of Texas at Austin, McCracken has earned the PEN New England Award, three Pushcart Prizes, and an O. Henry Prize, among other honors. Longlisted for the National Book Award, The Souvenir Museum is a story collection in which characters begin transformative journeys that test the strange relationships that bind families together.