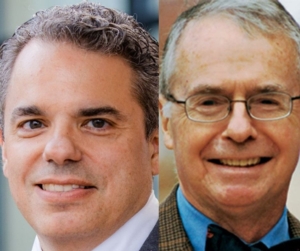 In conversation with John M. Cooper

Historian Neil Lanctot is the author of Campy: The Two Lives of Roy Campanella and Negro League Baseball: The Rise and Ruin of a Black Institution, a “prodigiously researched” and “enormously important historical corrective to feel-good versions of baseball integration” (The New York Times). The recipient of the Seymour Medal from the Society for American Baseball Research, he has published articles in Smithsonian magazine, The Philadelphia Inquirer, and The Baltimore Sun, among other periodicals. In The Approaching Storm, Lanctot details the early-20th century rift between three of the U.S.’s most important progressives as the country struggled to respond to the global consequences to World War I.

John M. Cooper’s many historical works include Pivotal Decades: The United States, 1900-1920; The Vanity of Power: American Isolationism and the First World War, 1914-1917; and Woodrow Wilson: A Biography, which was a finalist for the 2009 Pulitzer Prize. The recipient of a Guggenheim fellowship and a Fulbright professorship in Moscow, Russia, he is professor-emeritus at the University of Wisconsin-Madison.