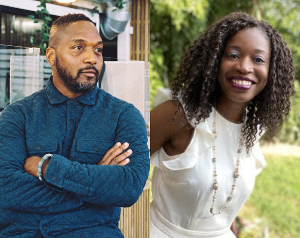 Bryant Terry | Black Food: Stories, Art, and Recipes from Across the African Diaspora

In conversation with Jamila Robinson

Chef and educator Bryant Terry is the author of four vegan cookbooks, including Grub, Afro-Vegan, and Vegetable Kingdom, winner of an NAACP Image Award for Outstanding Literary Work. In 2015 he earned a James Beard Foundation Leadership Award for his food justice activism. The chef-in-residence at the Museum of the African Diaspora in San Francisco, his writing and recipes have been published in periodicals such as Gourmet, Food and Wine, and The New York Times Magazine, among many other places. San Francisco Magazine selected him as one of the 11 smartest people in the Bay Area food scene and Fast Company referred to him as one of 9 People Who Are Changing the Future of Food. In Black Food, Terry offers a tribute to Black culinary creativity with more than 100 esteemed contributors from around the globe.

The assistant managing food editor at The Philadelphia Inquirer, Jamila Robinson is the chair of the James Beard Foundation Journalism Committee, where she is also a coach and mentor for the JBF fellowship program. She formerly worked as an editorial director for Atlantic Media, as a senior content strategist for the USA Today Network, and as a senior editor for features at The Atlanta Journal-Constitution.