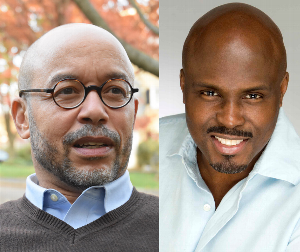 In conversation with Solomon Jones.

Lawrence Jackson’s award-winning books include The Indignant Generation: A Narrative History of African American Writers and Critics, biographies of Chester Himes and Ralph Ellison, and a memoir about his family history, titled My Father’s Name: A Black Virginia Family after the Civil War. A Bloomberg Distinguished Professor of English and history at Johns Hopkins University, he is also the founder of the Billie Holiday Center for Liberation Arts and a recipient of a 2019 Guggenheim Fellowship. Shelter is an essay collection that begins with Jackson’s initial struggle to make Baltimore his home and how his later adoption of the Charm City became a means to reexamine his personal history.

An award-winning Philadelphia Daily News columnist and morning host for 900 am WURD radio in Philadelphia, Solomon Jones is the author of the Essence bestselling novel The Bridge, as well as the critically acclaimed books Pipe Dream, Ride or Die, Payback, and Ten Lives, Ten Demands: Life and Death Stories, and a Black Activist’s Blueprint for Racial Justice. He is also a blogger and frequent on-air commentator for NPR-affiliate WHYY and is the founder of Words on the Street Literacy Program and the Rally for Justice Coalition.