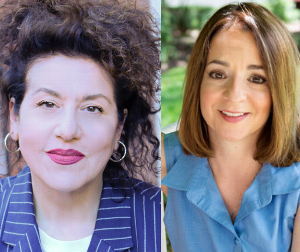 In conversation with Pam Jenoff

“A comedy writer with a heart of gold” (The New York Times), Adriana Trigiani is the bestselling author of 20 books of fiction and nonfiction that have been published in 38 countries. These works include The Shoemaker’s Wife; Very Valentine; Cooking with My Sisters; and Lucia, Lucia. Also an award-winning filmmaker, playwright, and television writer and producer, she directed the documentary Queens of the Big Time and wrote and directed the film adaptation of her debut novel, Big Stone Gap. Trigiani serves on the New York State Council on the Arts and is the founder of The Origin project, an in-school writing program in her home state of Virginia. Her latest novel, The Good Left Undone, follows three generations of Tuscan artisans struggling with a long-held family secret that emerges as the aged matriarch reflects on her family at the end of her life.

Pam Jenoff's New York Times bestselling novels include The Woman wth the Blue Star, The Lost Girls of Paris, The Orphan’s Tale, and The Diplomat’s Wife. A law professor at Rutgers University, she formerly served as special assistant to the Secretary of the Army, a diplomat for the State Department, and as a labor and employment attorney.