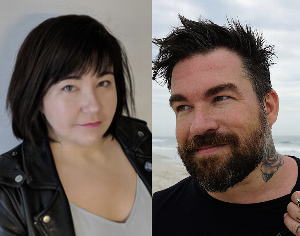 In conversation with Isaac Fitzgerald

Freelance journalist Chloé Cooper Jones was a 2020 Pulitzer Prize finalist in feature writing for “Fearing for His Life,” a profile of the man who filmed NYPD officers killing Eric Garner. Also a philosophy professor, she has published articles in a wide array of periodicals, including The Believer, GQ, Vice, and New York magazine. She is the recipient of the 2020 Whiting Creative Nonfiction Grant and the 2021 Howard Foundation Grant from Brown University, and her work has been anthologized in The Best American Travel Writing and The Best American Sports Writing. A memoir about motherhood, disability, and underlying societal expectations, Easy Beauty follows Jones’s painful literal and figurative worldwide journeys to reclaim spaces she’d been denied.

Isaac Fitzgerald appears frequently on The Today Show and is the author of the bestselling children’s book How to Be a Pirate as well as the co-author of Pen & Ink: Tattoos and the Stories Behind Them and Knives & Ink: Chefs and the Stories Behind Their Tattoos (winner of an IACP Award). His writing has appeared in The New York Times, The Guardian, The Best American Nonrequired Reading, The Boston Globe and numerous other publications. His debut memoir, Dirtbag, Massachusetts, is forthcoming in July, 2022. He lives in Brooklyn.