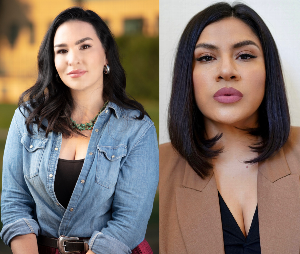 In conversation with Melinna Bobadilla

A story collection featuring Latinas of Indigenous heritage experiencing the challenges of friendship and family in the American West, Kali Fajardo-Anstine’s Sabrina & Corina won an American Book Award and was a finalist for the National Book Award, the PEN/Bingham Prize, and The Story Prize, among other honors. Fajardo-Anstine has contributed writing to an eclectic array of periodicals and journals, including The New York Times, Harper’s Bazaar, O the Oprah Magazine, and Boston Review. The 2022/2023 endowed chair of Creative Writing at Texas State University, she has earned fellowships from MacDowell, Yaddo, and Tin House. Her debut novel Woman of Light is a Western saga that spans five generations of Chicana women.

Melinna Bobadilla is an actor & activist  best known for roles like ‘Santos’ on Orange is The New Black and fierce immigration attorney ‘Melinna Barragan’ on the Peabody nominated series Gentefied, both on Netflix . Melinna is a multi-hyphenate culture maker and critic, as her work aside from acting includes being an educator, public speaker, VO artist and host/co-producer with Futuro Media’s Latino Rebels Live. Melinna is an alumni of UC Berkeley & NYU and is a proud 1st gen daughter of parents born in Mexico. You can find her work on Netflix, Apple TV Plus (Little America), HBO Max (For Rosa), and coming up on Showtime & Amazon Freevee. IG @MelinnaBobadilla