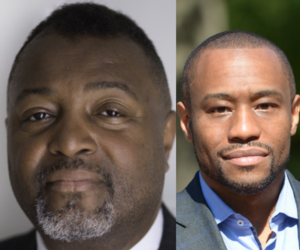 Malcolm Nance | They Want to Kill Americans: The Militias, Terrorists, and Deranged Ideology of the Trump Insurgency

In conversation with Marc Lamont Hill

A world-renowned counterterrorism expert and former career intelligence officer who has deployed in the Balkans, the Middle East, and sub-Saharan Africa, Malcolm Nance is a longtime consultant for the U.S. government's Special Operations and Homeland Security agencies. His New York Times bestselling books include The Plot to Hack America, Hacking Isis, The Plot to Betray America, and Defeating ISIS. The founder and executive director of the think tank Terror Asymmetrics Project on Strategy, Tactics and Radical Ideologies, he is a frequent commentator on MSNBC. In They Want to Kill Americans, Nance describes the existential threat to democracy posed by Donald Trump, his collaborators, and their followers.

The Steve Charles Chair in Media, Cities and Solutions at Temple University, Marc Lamont Hill is the host of BET News and the Coffee and Books podcast. The recipient of honors from the National Association of Black Journalists, GLAAD, and the International Academy of Digital Arts and Sciences, he is the author of six books, including Beats, Rhymes, and Classroom Life; Nobody: Casualties of America's War on the Vulnerable, from Ferguson to Flint and Beyond; and Except for Palestine: The Limits of Progressive Politics.