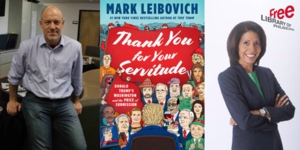 Mark Leibovich | Thank You for Your Servitude: Donald Trump's Washington and the Price of Submission

Mark Leibovich’s books include the No. 1 bestseller This Town, a “vastly entertaining and deeply troubling” (The New York Times Book Review) exploration of the political culture in Washington, D.C.; and Big Game, a beyond-the-playing-field analysis of professional football at its precarious economic and social peak. Former chief national correspondent for The New York Times Magazine and a former correspondent for The Washington Post, Leibovich recently joined The Atlantic as a staff writer and is a contributing political analyst for NBC and MSNBC. He won the 2011 National Magazine Award for his profile of journalist Mike Allen. A sequel to This Town, Thank You for Your Servitude is a no-holds-barred account of Donald Trump’s collaboration with the Republican Party to transform the once-proud party into a cult of personality mired in corruption and anti-democratic values.