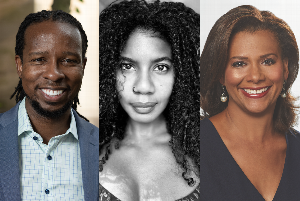 Ibram X. Kendi and Nic Stone | How to Be a (Young) Antiracist

Ibram X. Kendi is the Andrew W. Mellon Professor in the Humanities at Boston University and the founding director of the BU Center for Antiracist Research. He is a contributing writer at The Atlantic and a CBS News correspondent. He is the author of many books including Stamped from the Beginning: The Definitive History of Racist Ideas in America, which won the National Book Award for Nonfiction, and five #1 New York Times bestsellers including How to Be an Antiracist; Stamped: Racism, Antiracism, and You, co-authored with Jason Reynolds; and Antiracist Baby, illustrated by Ashley Lukashevsky. His latest books are How to Raise an Antiracist and Goodnight Racism, illustrated by Cbabi Bayoc. In 2020, Time magazine named him one of the 100 most influential people in the world. He was awarded a 2021 MacArthur Fellowship, popularly known as the “Genius Grant.”

Nic Stone is an Atlanta native and a Spelman College graduate. Her debut novel for young adults, Dear Martin, and her debut middle-grade novel, Clean Getaway, were both New York Times bestsellers. She is also the author of Odd One Out, which was an NPR Best Book of the Year and a Rainbow Book List Top Ten selection, Jackpot, and Shuri: A Black Panther Novel. Dear Justyce, the sequel to Dear Martin, recently published. She is one of the authors in the New York Times bestselling book Black Out, recently optioned for as a new anthology program for Netflix by Barack and Michelle Obama's production company, Higher Ground. Find her online at nicstone.info or @nicstone

Based on Kendi’s internationally acclaimed book and co-authored by bestselling author Stone, How to Be a (Young) Antiracist is a dynamic reframing of the concepts shared in How to Be an Antiracist, with young adulthood front and center.

Masks are welcome but are not required.
Each ticket includes a signed book. You will collect your book when you enter the auditorium.
There will not be a booksigning after the event
Books provided by Uncle Bobbie's Coffee and Books
Ticket price includes processing fees
US orders only