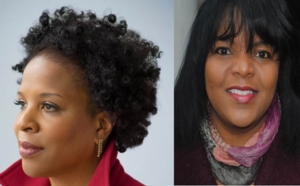 Focusing mostly on the urban South, Tayari Jones‘s four novels include Silver Sparrow, The Untelling, and Leaving Atlanta, winner of the Hurston/Wright Award for Debut Fiction. “One of the best writers of her generation” (Atlanta Journal Constitution), she currently teaches writing in Rutgers University’s MFA program. Her new novel follows a husband and wife who seem to embody the new South but are unmoored by false accusation and imprisonment.

Stephanie Powell Watts is the author of the 2017 novel No One Is Coming to Save Us, a Great Gatsby-esque tale of African Americans in Jim Crow North Carolina, which presents “an important, largely missing part of our ongoing American story” (Chicago Review of Books). In 2017, No One is Coming to Save Us was chosen by Sarah Jessica Parker as an inaugural pick for the American Library Association’s Book Club Central, and in 2018 the novel earned Ms. Watts the NAACP Image Award in the category of Debut Author. Her story collection We Are Taking Only What We Need was a PEN/Hemingway finalist, and one of O: The Oprah Magazine’s 2013 Best Summer Reads. A professor at Lehigh University, Watts is the winner of a Pushcart Prize.