The Free Library of Philadelphia was founded in 1891 as the city’s first public library system. Its Rare Book Department, among the largest in American public libraries, exists to serve the people of Philadelphia, as well as the students, scholars, and researchers who use its collections. Daily tours, exhibitions, and classes help to open the department’s collections to a wider public.

The Library’s first gift of rare books, the Copinger-Widener Collection of Incunabula, was received in 1899. Other gifts followed: the Hampton L. Carson Collection on the Growth and Development of the Common Law in 1929; the John Frederick Lewis Collections of cuneiform tablets, European manuscripts, and Oriental manuscripts in the 1930s; and the A.S.W. Rosenbach Collection of Early American Children’s Books in 1947. With inspired forethought, Simon Gratz, one of the original members of the Board of Trustees, willed money to establish a trust fund expressly for the purchase of rare books. Subsequent donations over the years have enabled all additions to the collections to be purchased with endowment funds. 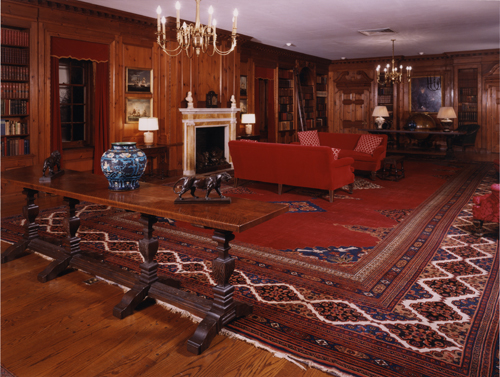 The bequest of William McIntire Elkins, who died in 1947, brought his entire library, containing major collections of Oliver Goldsmith, Charles Dickens and Americana, as well as miscellaneous literary treasures. With the Elkins bequest came the gift of the room itself with its furnishings, through the generosity of his heirs. The installation of the 62-foot-long paneled Georgian room in the third floor of the Central Library at Logan Square took place over the next two years, and the Rare Book Department opened in 1949.

The new facility attracted further gifts: the Thornton Oakley Collection of Howard Pyle and His Students; the D. Jacques Benoliel Collection of the Letters of Charles Dickens; the Moncure Biddle Collection of Horace; the Norman H. and Charlotte Strouse Collection of Letters of the Presidents; the American Sunday-School Union Collection; the H. Bacon Collamore Collection of Beatrix Potter, complemented by Potter material from Mrs. Charles Cridland and Mrs. Richard K. Stevens; the Frederick R. Gardner Collection of Robert Lawson and American and European Children’s Books; the collections of children’s books assembled by Emerson Greenaway and Mrs. William H. Allen; the Richard Gimbel Collection of Edgar Allan Poe; and the archive of Munro Leaf’s writings and drawings. Two major collections, the Pennsylvania German Fraktur and Imprints and the Arthur Rackham Collections, were purchased with trust funds.

The Reading Room is available for research 9:00 a.m. – 4:45 p.m. Monday through Friday, except for legal holidays. Because space is limited, appointments should be made at least one day in advance. To make an appointment, please call 215-686-5416 or email erefrbd@freelibrary.org.