Learn of the Luminous Mysteries of Kabbalah

Do you know what Kabbalah is? Join us on May 23 at 7:00 p.m. to learn about this ancient mystical Jewish tradition. Professor Joel Hecker will talk about the history of Kabbalah, focusing on its central and canonical text, Sefer Zohar, (The Book of Radiance), which has amazed its readers since it emerged in Spain over seven hundred years ago. Kabbalah, much more than red strings and celebrities, has come to form an integral part of modern Jewish rituals and consciousness.

Joel Hecker, an expert on Kabbalah, is Professor of Jewish Mysticism at the Reconstructionist Rabbinical College. He is the author of Volumes 11–12 of The Zohar: Pritzker Edition, the first complete translation of the Zohar into English. Volume 11 received the Canadian Jewish Literary Award in the Category of Scholarship. He is also the author of Mystical Bodies, Mystical Meals: Eating and Embodiment in Medieval Kabbalah and has published widely on a range of themes in Jewish mysticism.

This event is free, but we ask that you RSVP at Eventbrite. This program will be held in Room 108 at the Parkway Central Library.

If Kabbalah intrigues you, you can find an assortment of titles including books, audiobooks, and streaming video on this topic through our catalog and at the Education, Philosophy, and Religion Department.

While much music has also been inspired by Kabbalah, little of it forms an intrinsic part of this mystical subject. However, the beginning of the Friday night service, the Kabbalat Shabbat (Welcoming the Sabbath), which is a Kabbalistic tradition, includes the song "Lecha Dodi". This beautiful song has been recorded by many performers in many different styles. You can find this song and other Kabbalah-influenced music in the following Spotify playlist.

If you have any questions about this event or want to find out more infomation about Kabbalah, you can always visit the Education, Philosophy, and Religion Department or contact a staff member at 215-686-5392. 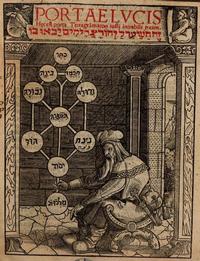 Joel Hecker pictured with his book, The Zohar: Pritzker Edition, the first complete translation of the Zohar into English.
2 Comments | Add a Comment
I know the basics of qabalah having been a student of b.o.t.a. i seek the spiritual
Wilma jean moon - Buderim. Queensland australia
Kabbalah is good and I will like to learn it's mystical ways
Roy Andrew