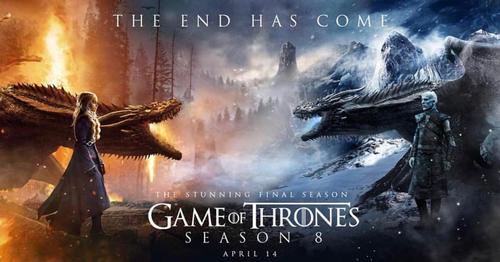 Eight years ago, HBO debuted a trailer for a new series called Game of Thrones. (My colleague’s 2011 blog post previewed the show and highlighted the books in our collection.) I was confused and intrigued all at once. Hand of the King? Iron Throne? Ravens? House Targaryen?

I was intimidated because I hadn’t read the books. I didn’t think my appreciation for Sean Bean could overcome the large number of characters (at least 18 appeared in the trailer), complex storylines, and immensely detailed world created by George R.R. Martin.

However, I decided to give it a try. Each week, I had more questions that needed to be answered. When is winter coming? Will we ever see dragons? What’s so scary about a wall? Then, I made it to the ninth episode (known to viewers as THE epic episode of each season.) I was upset and almost gave up on the show.

Eight years and 58 episodes later, here I am. I never miss a chance to use a quote from the show in casual conversation. (Last week, after returning an item to its owner, I declared “my watch is ended”.) As a librarian, it is my duty to let everyone know that two major plotlines were revealed by a character reading a book. Game of Thrones’ pop culture impact will continue for years to come.

The final season begins on HBO on Sunday, April 14! You can start your journey to Westeros or revisit your favorite episodes by checking out the previous seasons from our catalog.